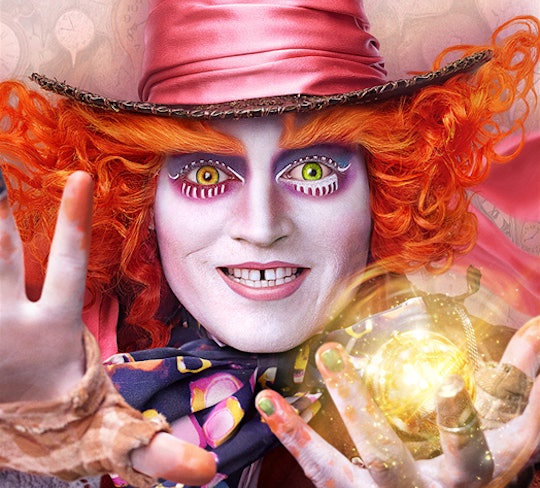 Was 'Alice Through The Looking Glass' Based On A Book? Kind Of, But Not Really

The sequel to Disney's 2010 live-action adaptation of Alice in Wonderland opens on Friday, and parents with young kids who might not have the attention span for the original classic books might be tempted to use the films as a gateway to Wonderland. But those hoping to see an Alice Through the Looking Glass based on the book will be sorely disappointed. Yes, Through the Looking Glass is based on Lewis Carroll's book, but it seems that every film adaptation of the books brings us farther and farther away from an accurate representation.

While Disney's 1951 animated Alice in Wonderland strove for accuracy, it got overly caught up the kookiness of Alice's new friends, leaving her with no character herself, as one of the original writers lamented to The New York Times. "She merely plays straight man to a cast of screwball comics." Trying to cram in as many characters as possible, it also heavily edited the story, creating a hodgepodge of both Alice's Adventures in Wonderland and its sequel, Through the Looking-Glass, and What Alice Found There, by Lewis Carroll. Two books about a girl named Alice became a movie about a wacky cat, a pompous queen, and a garden full of singing flowers. But the live action movies made no effort to stick to the original stories, instead functioning as Tim Burton fever-dream sequels.

2010's Alice in Wonderland threw out the plot of the book entirely, keeping the characters and amping up the crazy. Seven-year-old Alice from the book became a 19-year-old, returning to Wonderland (now called Underland) to slay the Red Queen. The Mad Hatter and the Caterpillar were back, but they were no longer the fanciful creations of a young girl's imagination; the new iterations were over-the-top "trippy," meant to shock, like the doodles in an antisocial teen's notebook. That's not to say it's bad (it's colorful!) — it's just nothing like the book. The movie is a bit like a fan fiction adaptation, and anyone who's seen Edward Scissorhands, Sleepy Hollow, or Corpse Bride knows that when Burton and his muse, Johnny Depp team up, it's generally a fun affair (we won't talk about Sweeney Todd, Dark Shadows, or Charlie and the Chocolate Factory, OK?).

Alice Through the Looking Glass, like its predecessor, has a brand new story to tell, and it's like nothing that ever sprang from Carroll's pen. The new story features pirates, time travel, and a Hatter who's now "dying of sadness," according to Rolling Stone. It's rated PG, so parents should just think about what their child can tolerate before heading to the theater. As a hard-core Alice fan for life (just ask my tattoo artist), I'm still interested in seeing another take on the tales. But those looking for a faithful retelling of the books will have to be happy with the inventive, colorful, and creative adaptations. All book lovers know that the book's always better than the movie anyway.