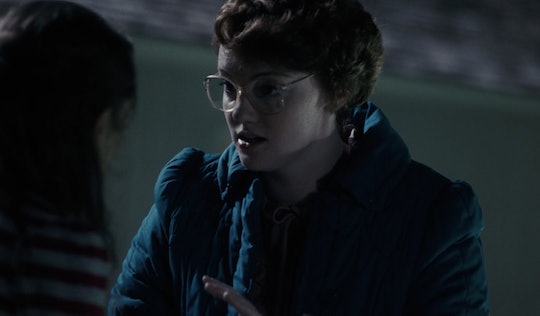 We All Must Know: Was Barb At The Golden Globes?

The 2017 Golden Globes kicked off with a star-studded musical opening number, complete with the kids from Stranger Things popping in to perform a quick rap. But the opening also included one character deeply beloved on the show who didn't quite get the ending the internet wanted for her: Barb, Nancy Wheeler's doomed best friend who was surrendered to the Upside Down early on in the series.

Viewers got a glimpse of Barb in the pre-filmed segment, which was a real treat. She emerged triumphantly from the pool that was her doom on the show in a synchronized swimming number populated by multiple Barbs. But did she get to make an appearance in person? Is Barb from Stranger Things at the 2017 Golden Globes?

Actress Shannon Purser, who portrayed Barb on the show, wasn't spotted on the red carpet, but at first it seemed like there was a chance she was still going to attend the ceremony. When a fan on Twitter said that it was too bad she wasn't at the Golden Globes, Purser had an interesting response: "Uh, I wouldn't turn off the tv just yet..." That was definitely a hint that there could be more Barb to come, and Purser's promising tweet really made it sounds like Barb might be showing up for a second time over the course of the ceremony. However, despite her tweet, Purser did not actually appear for a second time after the opening number.

Still, Purser's appearance in the opening was definitely a great tribute to Barb. Seeing her was a pleasant surprise, particularly for the fans who have rallied in the wake of Barb's untimely death. It seemed like viewers of Stranger Things became particularly attached to Barb as the nerdy outsider bestie who got just about the worst ending possible.

Seeing Barb pop out of the pool where she also lost her life was a sweet nod to the character's following; it also provided her with a funnier, happier twist ending. Her fans were sure to appreciate seeing Barb come back better than ever, even if it was just for a few moments during an awards show.

Although it was only a brief cameo in the grand scheme of the nearly 3-hour show, it was still nice to see Barb finally getting her moment in the sun at this year's Golden Globes. Here's hoping she makes another winking appearance in the show's second season.