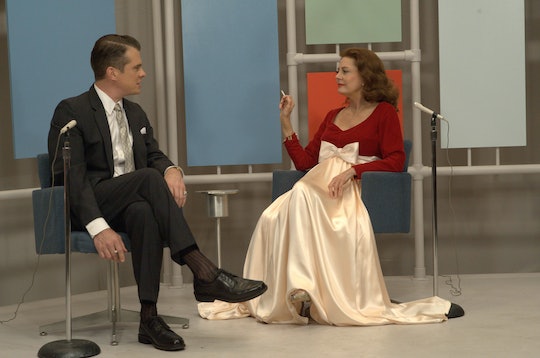 The Oscar Nominations Were Revealed On 'Feud'

The early word of mouth for 1962's What Ever Happened to Baby Jane? wasn't great, at least according to Feud: Bette and Joan, but the film took off as soon as audiences caught a glimpse of it. The project was a huge success for everyone involved and earned rave reviews, but Joan Crawford quickly noticed a disparity in the critical response: Bette Davis was getting all the acclaim. At the very end of "More, or Less," Joan heard the news about Oscar nominations and let out a scream, presumably because she had been snubbed. But what about her co-star? Was Bette Davis nominated for What Ever Happened to Baby Jane?

Yes, indeed that was the case. Davis was nominated for playing the title role in the film and it was historic at the time because it was her tenth nomination. She was the very first person to snap up 10 noms, though she was surpassed later by Katharine Hepburn (12 noms, four wins), Jack Nicholson (12 noms, three wins), and Meryl Streep (who blitzed past everyone to earn 20 noms, winning three times).

It was also Davis' last nomination, bringing home the idea that Baby Jane really was her last chance to make her mark on cinema. While she had gotten many nominations over the years, she hadn't won since very early in her career when she netted two Best Actress wins for 1935's Dangerous and 1938's Jezebel. She hadn't had a major hit in years and winning for Baby Jane could have been incredible for her career. But spoiler alert: she didn't win.

The Oscars also proved to be one more way for the feud between Crawford and Davis to flourish. It wasn't enough that one had been nominated and the other hadn't; Crawford also went out of her way to make the situation more fraught. Davis accused Crawford of actively campaigning against her, but that wasn't all Crawford did. She found a way to get on that Oscar stage and accept an award she wasn't even nominated for, all to steal the spotlight and spite her co-star.

How did Crawford manage this, you might be wondering? She went around to every actress who was nominated alongside Davis and offered to do them a favor: if for whatever reason they couldn't make it to the ceremony, she would be happy to accept the award on their behalf. Anne Bancroft, nominated for The Miracle Worker, took her up on the offer because Bancroft was busy starring in a play on Broadway and couldn't attend the awards. Bancroft ended up winning, so Crawford swanned up to the stage to accept for her while Davis allegedly fumed in the audience.

Not only did Davis lose the award she felt she deserved, but she had to watch her rival walk off with it, too. Now that's cold.