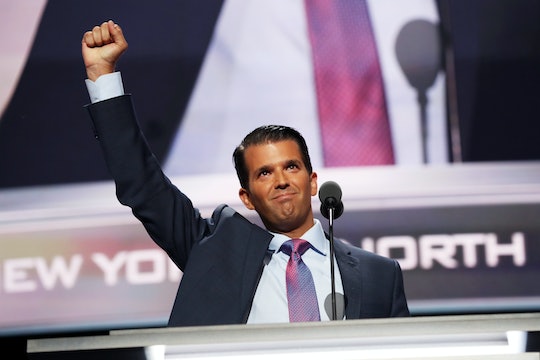 Was Donald Trump Jr.'s Speech Plagiarized? Some Lines Were Recycled

Given the firestorm that followed Melania Trump's speech from the first night of the Republican National Convention after it was revealed that parts of it were allegedly lifted directly from a speech First Lady Michelle Obama gave in 2008, it wouldn't be a stretch to assume that the Trump campaign would want to pre-vet further speeches extra carefully going forward. But, according to NBC News, the speech Donald Trump Jr. gave Tuesday night appears to also have some issues. Was Donald Trump Jr.'s speech plagiarized? It certainly wasn't entirely original.

Donald Trump Jr. took to the RNC stage in support of his father — now the official Republican presidential candidate — with a speech that had been written (at least in part) by writer and law professor F.H. Buckley. And in it, Buckley included a few lines almost directly from one of his own previously-written articles in American Conservative, entitled "Trump vs. The New Class." One of the recycled lines made reference to American schools being like Soviet-era department stores, "run for the benefit of the clerks and not the customers," while another spoke about the "elevator to the upper class," being stalled on the first floor.

The similarities seem a little cringe-worthy in light of what happened to Melania Trump one night earlier, but Buckley spoke out about it this morning, telling ABC News, “I was one of the principal speechwriters. It’s no problem.”

The difference, Vox's Ezra Klein said, is that, unlike Melania Trump's speech, which lifted sections of Obama's words without asking or attributing her, Trump Jr.'s speech was written by someone recycling his own words. Although one would think a speech as high-profile as Trump Jr.'s would be best off written to be completely original, the two situations, Klein argued, aren't really that comparable.

There's also the fact that, in the midst of the Melania Trump backlash, for example, many Trump supporters pointed out that politicians lift ideas and phrases from others' speeches all the time — something Obama and Vice President Biden have allegedly also done, according to CBS News. In this case, at least, it looks like Buckley was just so fond of his own previously-echoed sentiments that he thought he'd use them again. Not necessarily blatant plagiarism, but not necessarily right either.

But even if plagiarism is a common occurrence in political speeches, and even if Trump Jr.'s speech writer recycled his own previously-published words in the speech instead of someone else's, it seems like it would have been wise to steer clear of that during something as important as the RNC, especially given what had happened to Melania Trump. The stakes are high, and speakers' words will naturally be scrutinized — surely saying those ideas in a different-enough way, or at least attributing them instead of passing them off as original would have been a good idea.

And, ultimately, self-plagiarism — that is, reusing your own words in another work without attribution — is still plagiarism, though as The Washington Post noted, this softer form is "a bit of an ethical gray area."

There's no denying that the recycling of phrases in Trump Jr.'s speech is a much different scenario than the kind of plagiarism found in Melania Trump's, and that it makes a huge difference that the words in the latter speech were used intentionally by the writer. In all likelihood in fact, this self-plagiarism may have even gone wholly unnoticed if it weren't for the debacle surrounding Melania Trump. But even if both Trump and Trump Jr. were just reading out words that had been given to them, when it comes to something as important as the presidency of the United States, it doesn't seem particularly unreasonable to expect them to be original, and written with a little more integrity.