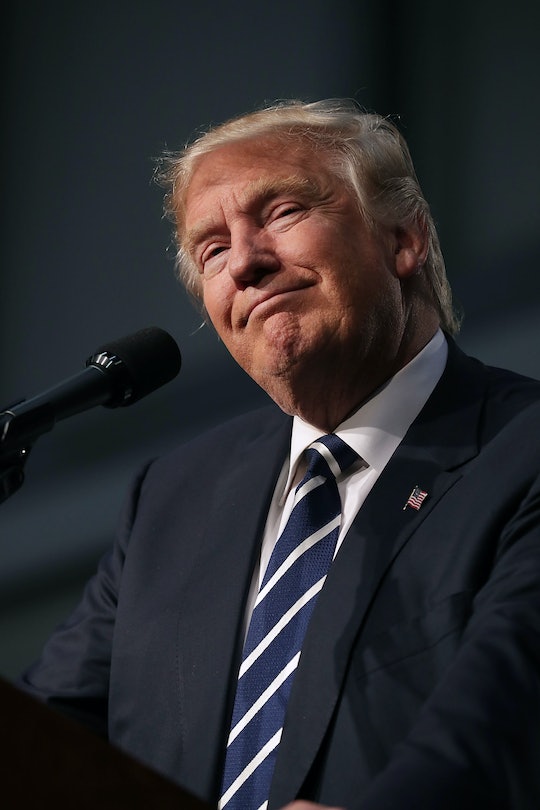 Exploiting a preexisting glitch where visitors could insert their own text on Trump's home page, the poop-emoji banner was birthed. Simply typing an original message after the site's URL caused the banner to display customized headlines and, naturally, the Internet took it and ran with it. "Hackers" added their own touches, trolling "CONGRATS TO PRESIDENT-ELECT CLINTON," "TRUMP IS BAD AT INTERNET," and "TRUMP CONCEDES." If you didn't get the chance to add your own slogan, it appears it's too late; Trump's camp has reportedly removed the feature. Sad face emoji.

Coders got a kick out of the blatant oversight. Twitter user/web developer Izzy Galvez noted "Trump's official website has a glaring XSS vulnerability" and Engadget called the fluke "just bad code." Though it's a wonder why it took this long for us to find out about the glitch, Election Day seems like as good of a time as any to poke fun at the GOP nominee.

Over-correcting and perhaps overreacting, it seems that Trump's team has removed some features from its site as altogether, specifically its form meant for press releases. Seeing as users got pretty brutal given all the freedom beforehand, it's probably better to be safe than sorry:

A bit of much-needed respite on an otherwise pretty stressful day, the "hack" was a nice oasis amidst a lot of tense news. Seeing one's own inane message splashed across Trump's serious campaign site gives a sense of control, no matter how fleeting and how flimsy it actually might be. Who knew that simply adding a "%20" to the URL along with the slogan of your choice could make you feel like a hacker and a political combatant in equal measure?

Polls have already closed across the country and will continue to close until 11:00 p.m. EST. If you're looking for a distraction to take your mind off of a potentially terrifying presidential outcome, the Trump website hack is no longer available to you, so consider another activity. Maybe watch Netflix? Get in some good Facebook stalking? Consider getting to bed early with the hope of waking up in a better place? It could take awhile for the final results of election to be announced, so a secondary activity could be your best bet.