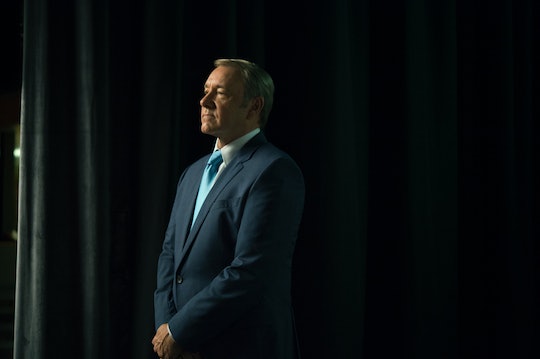 Was Frank's Dad In The KKK On 'House Of Cards'? President Underwood Has To Answer For His Father's Past

After a long anticipated wait, House of Cards is finally back on Netflix, with all 13 episodes available for streaming. Like every season before it, this season of House of Cards is packed with twists, turns, and shocking moments. A surprising revelation is about Frank's dad on House of Cards — Calvin Underwood. A leaked photo shows a member of the Klu Klux Klan in full white hooded regalia posing with Frank's father. The timing of the leak couldn't be worse, on the morning of the Democractic primary in his home state of South Carolina. It's a huge blow to Underwood's campaign.

Season four more than makes up for the stagnancy of last season with plenty of momentum and moving parts. Warning: major spoilers for episode three of House of Cards, so if you haven't seen it yet, you've been warned! One of the most intriguing moving parts early on in season four has been Frank and Claire Underwood's relationship. By episode three, the power pair are circling around each other like mongoose and snake, but we're not really sure which is which, and for whom we should be rooting. But the real shock here is not that Frank's father might have been associated with the KKK — rather, it's that his own wife leaked the photo.

Just when you couldn't hate-love Frank Underwood enough, the writers go and throw us this juicy KKK subplot. First, a little context for where this all fits in the episode: Claire Underwood organizes a series of political maneuverings to land herself a congressional seat. Frank is onto her schemes, and having none of it — and dashes all her hopes by shutting her down in the most epic way possible: With the State of the Union, of course — but only she knows that despite Frank's honied words in front of millions.

As payback, Claire has the very private and embarrassing photo of Frank's father leaked to the press (always two steps removed, of course) the morning of the South Carolina primary. Despite his best efforts at damage control, he loses his home state by a wide margin to fellow Democratic candidate, Helen Dunbar.

But before you get ready to rally against Frank, the rest of the episode reveals the very complicated tale of how the photo of Frank's dad and a klansman even came to be. Standing before a crowd of black parishioners in church, Frank explains how his father needed to borrow money in order to keep from losing their farmhouse in Gaffney. When every other bank turned him down, only one person could help him — and to get on his good side, Calvin Underwood went to a klan meeting and posed for the photo. His father's huge sacrifce of pride saved their home, and ultimately paved the way for Frank to pull himself up by the bootstraps into the White House.

If the photo was so damaging, why would Frank even hold onto it? He reveals the surprisingly poignant truth to Claire, once he realizes that she's the one who betrayed him — and it's truly one of actor Kevin Spacey's best moments early on in the season:

Do you know why I kept this? Do you know? Because it's the one time I was proud of my father. Because this man, in this moment — as despicable as it was — is fighting to survive. He is doing whatever it took.

Let's not forget — Frank was never exactly a fan of his father:

It's a compelling storyline for Frank Underwood. Even more compelling is how the House of Cards KKK subplot eerily mirrors real life, given the recent controversy surrounding GOP candidate Donald Trump and KKK leader David Duke.

House of Cards is available for streaming on Netflix.