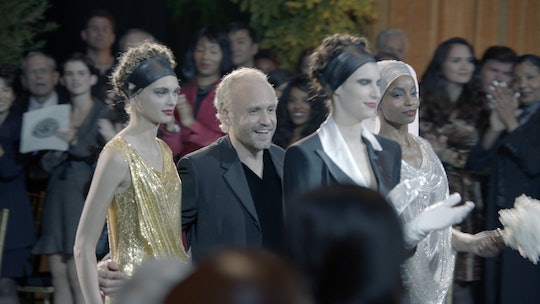 In the second episode of The Assassination of Gianni Versace, Gianni Versace seeks medical care at a clinic for an unspecified illness. It's 1994, three years before his murder, and he's visibly weak from whatever is plaguing him. But the cause of his sickness is never mentioned, leaving some viewers to wonder: was Gianni Versace really sick?

The second season of American Crime Story was based on a nonfiction book by Maureen Orth called Vulgar Favors. It was in that book that Orth asserted that Versace was HIV positive, something the show seems to be implying throughout "Manhunt." In her book, Orth claimed that between 1994 and 1995, Versace was allegedly seen in South Beach looking "weak and emaciated" and it was eventually announced that he had a rare former of inner-ear cancer. She quoted an unnamed neighbor as saying, "He could barely walk half a block and needed to be supposed by Antonio [D'Amico, his partner] the whole time."

According to Orth, Versace's diagnosis was kept quiet because the company was on the verge of going public and his image needed to be carefully maintained. Orth interviewed Dr. Emma Lew, who performed Versace's autopsy, and was told that he "had no natural disease that would have caused his death at that time." Later Paul Scrimshaw, the lead Miami Beach detective on the Versace murder, informed Orth that he "was able to find out from autopsy results that [Versace] had tested positive for HIV."

However, the Versace family has been denying that he was HIV positive since the publication of Vulgar Favors. In 1999, a spokesman for the family told People, "This is an example of an unprincipled individual using rumor and innuendo to capitalize on the memory of Gianni Versace." They disputed it again when The Assassination of Gianni Versace was set to premiere in a statement that read, in part:

Orth makes assertions about Gianni Versace's medical condition based on a person who claims he reviewed a postmortem test result, but she admits it would have been illegal for the person to have reviewed the report in the first place (if it existed at all). In making her lurid claims, she ignores contrary information provided by members of Mr. Versace's family, who...were in the best position to know the facts of his life....

Orth stood by her research, telling The Hollywood Reporter:

I was told on the record by the lead detective on Miami Beach that he had heard from the medical examiner who did the blood work that [Versace] was [HIV-positive]. And it also goes along with other people who told me that he was very weak at one time and he needed Antonio to help him walk, and they came over to his house when he was having breakfast and he had 27 bottles of pills in front of him. Now, does that mean they're for HIV? But the blood thing from on record from the Miami Beach, that's pretty [solid].

It remains unclear whether or not Versace was HIV positive (and it bears repeating that the family insists he was not), but he supposedly did have inner-ear cancer. Donatella Versace told New York Magazine that her brother was certain he was going to die because of it: "He was sick with cancer in his ear before he was murdered. The last two years of his life, Gianni was hiding, hiding up in his apartment in Via Gesú, because his ear was so big." She continued:

It was impossible to do a surgery because of the position, because to do a surgery, part of his face was supposed to drop. That's why the will and everything was done, and I knew everything about, because he thought he was going to die. But then it was declared cured six months before he was murdered. We celebrated; we drink champagne and everything. Six months later, he was killed.

Based on Donatella's statement, the timeline becomes a little muddier. Versace's ear cancer was reported to have occurred earlier, around 1994, but a 1999 issue of Out claimed that he was "fighting off bone cancer in his cheek" in 1996. "He was more tired because of the chemo, but he kept working," said D'Amico at the time. "He really had such strength."

The cause of Versace's illness might be disputed, but it does seem that he was ill for a period of time in the mid to late '90s. And just as he was recovering, Andrew Cunanan took his life.