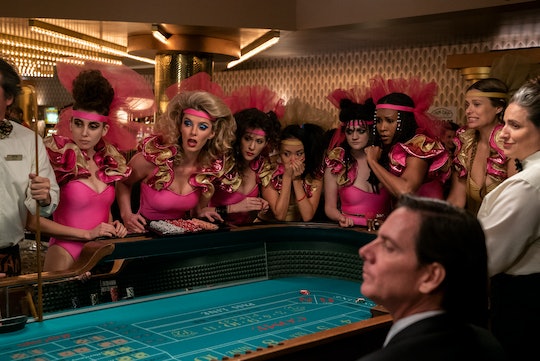 GLOW returns to Netflix its third season, and fans are more than ready to dive back into the action with the Gorgeous Ladies Of Wrestling. It's one of the most popular shows on Netflix, and viewers are already wondering what the future holds for the series. So, was GLOW renewed for Season 4?

As of now, Netflix hasn't announced its plans for the series, but there is a good chance it will make a decision soon. As reported by The Hollywood Reporter, last year, the streamer renewed the show just weeks after Season 2 premiered. If Netflix follows the same renewal schedule, fans should hear something in the next few weeks.

The show is beloved by audiences, but it’s also received its fair share of critical acclaim. According to the Los Angeles Times, GLOW earned numerous award nominations since its debut, including three Emmy nods last year, and one Golden Globe nomination for 2019. With so much praise for the show, I would imagine Netflix would continue to bank on the series, and renew it for one more season, if not more. In the meantime, fans can take comfort in knowing that GLOW producers already have future storylines mapped out.

In an interview with Gold Derby, showrunners Liz Flahive and Carly Mensch talked about the shifts fans will see in Season 3, along with their plans for subsequent seasons. Flahive revealed the new season will follow the ladies to Las Vegas, while it dives deeper into their characters' lives. “We have a dream number of seasons in our head,” added Mensch, “that we shall not be revealing in this interview."

Set in the 1980s, the show tells the story of Ruth Wilder (Alison Brie), an unemployed struggling actress who finds friendships and stardom in the world of women's wrestling. She works alongside 12 other Hollywood misfits, including Debbie Eagan (Betty Gilpin), a former soap actress who was sucked back into the business after the birth of her son. Leading the pack is Sam Sylvia (Marc Maron), a washed-up director whose goal is to make these ladies the biggest stars in wrestling.

According to a Netflix synopsis, Season 3 will follow the Gorgeous Ladies Of Wrestling to the Las Vegas strip, where they become headliners at the Fan-Tan Hotel and Casino. “The women quickly realize Sin City is much more grind than glitter,” the description reads. “Ever the team cheerleader, Ruth's passion for the show begins to take a backseat to her growingly complicated personal life. Debbie is making headway as a producer, but continues to be consumed with guilt over the distance between her and her son. As their residency wears on, the lines blur between performance and reality, and the cast find themselves struggling with their own identities both in and outside of the ring.”

It looks like Season 3 is going to be full of exciting twists and turns And while you may have to wait a while to get confirmation on Season 4, you can take comfort in knowing you have 10 brand new episodes to dive into this weekend.

Season 3 of GLOW is now streaming on Netflix.