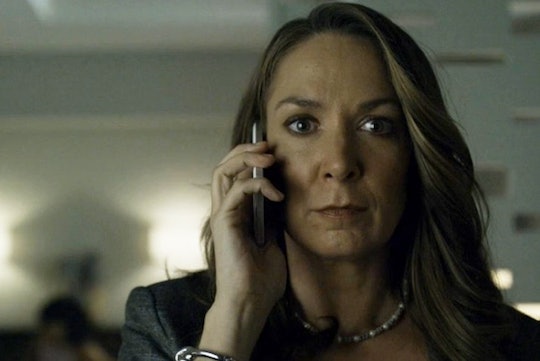 Was Heather Dunbar Behind The KKK Billboard On 'House Of Cards' Season 4? This Sabotage Was Closer To Home

Bad things are happening to Frank Underwood. He's completely lost control a few episodes into Season 4 of House of Cards, and he doesn't know how to regain it. (Spoilers for those that have not caught up with the current season.) Not only does he have an abysmal approval rating, but his wife has left him because he has basically ruined her life. To top it off, a billboard with a photo of Frank's father and a KKK member was created to sabotage Underwood 2016. There's one person who has a lot invested in Frank failing and that's Frank's democratic opponent in the 2016 election. So, did Heather Dunbar set up the KKK billboard to hurt Frank's campaign?

Well, that would be the easy answer, wouldn't it? Of course, that's not the answer, but let's talk through why that would make sense. Frank is willing to do just about anything to win this election and stay in power. Because of that, his opponent knows that she also has to do everything she can to win. Heather has been tempted to run a dirty campaign, evident when she threatened to release Claire's journal detailing her abortion. Although that didn't happen, it's clear she'll go there. There being the low, low place Frank Underwood resides.

But, Heather wasn't behind the KKK photo leak, despite the White House's original thoughts. Instead, this jab at Underwood 2016 was done by someone on his team, by his side, and sometimes in his bed. Yes, Claire and Leann Harvey were behind the leak of the photo, and of course it was done with ill-intentions in mind.

If Dunbar were behind the photo leak and billboard, it would potentially kill Frank's campaign. But, it was never Claire's intention to kill Frank's campaign with the billbaord. In fact, this was Claire's way of getting herself on the campaign. Yes, in some twisted way, Claire wants to be on the sinking ship that is Underwood 2016, and to do so she is creating billboards that threaten her husband's career and character (if he had any character remaining).