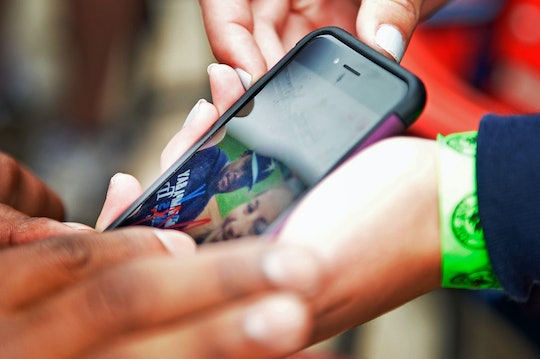 Ever since Instagram announced the launch of its newest feature, Instagram Stories, people have been giving the photo app its fair share of side-eye. Instagram Stories look a lot like Snapchat Stories, and many users were quick to accuse the company of copycat practices. It begs the obvious question: Was Instagram Stories modeled after Snapchat? Apparently, it's a comparison that Instagram CEO Kevin Systrom isn't bothered by.

"They deserve all the credit," Systrom reportedly told Tech Crunch during an unveiling of Instagram Stories, in what must be one of tech companies' most honest moments. However, Systrom didn't see the similarities between Snapchat and Instagram Stories as a problem, telling Tech Crunch:

When you are an innovator, that’s awesome. Just like Instagram deserves all the credit for bringing filters to the forefront. This isn’t about who invented something. This is about a format, and how you take it to a network and put your own spin on it. ... I think what you see is that every company looks around and adopts the best of the best formats or state-of-the-art technology.

Systrom's right, of course. As he pointed out while speaking to Tech Crunch, hashtags originated on Twitter before making their way onto other social media networks, Facebook made feeds popular, and Instagram made filters blow up. The only difference between Systrom and other tech leaders, really, is that he gave credit where it was due, rather than making vague, inconclusive statements about the company's originality.

Even without Systrom's admission that "Snapchat’s done a really awesome job," it seems fairly clear that Instagram Stories was an attempt to win over users loyal to Snapchat's platform. According to Business Insider, Snapchat overtook Instagram as teens' most important social network just this spring, and Facebook (which owns Instagram) recently bought MSQRD, a live filter app (which is somewhat similar to Snapchat's live filter feature). No word on whether MSQRD's live-filtering abilities will make it onto Instagram now that Facebook owns both companies, but considering the success of Snapchat's puppy ears and purple lipsticks, it wouldn't be surprising.

There's no doubt that Instagram modeled Instagram Stories after Snapchat. The fact that Facebook and Instagram are trying to infringe on Snapchat territory shouldn't be surprising — the fact that Instagram decided to name its new feature "Stories" and be transparent about its inspiration, however, is. What will be interesting to see now is how Snapchat responds to Instagram's update, and just how many more Snapchat features Instagram will be inspired by (btw, check out Romper's Instagram here).