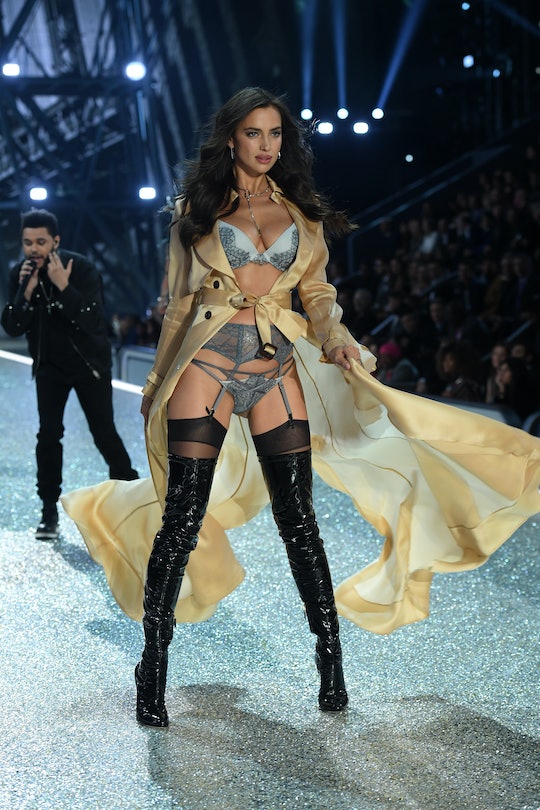 Was Irina Shayk Pregnant At The Victoria's Secret Fashion Show? Her Reveal Was Surprising

While the Victoria's Secret Fashion Show happens every single year, it never ceases to amazing me just how beautiful the entire production is. You'd think I'd be used to the hair, the glitz, the glam, and the perfect runway walks by now. This year, though, between The Weeknd's and Lady Gaga's performances, there was Irina Shayk, the Victoria's Secret model who has been with the company prior to the show, and has also in a relationship with Bradley Cooper (you've probably heard of him) since 2015. It was revealed just just a week prior to the show's premiere that Shayk was expecting with Cooper, but was Irina Shayk pregnant during the Victoria's Secret Fashion Show?

According to Harper's Bazaar, the show (which filmed the Wednesday before it aired) did an "expert job at subtly concealing any physical signs" of Shayk's second semester pregnancy. A source even told People that while some of her outfits were slightly "less revealing in the stomach", no one even suspected that Shayk is expecting her first child with Cooper throughout the entire circus that I would imagine is the backstage area of the Victoria's Secret Fashion Show. Sneaky, sneaky, Victoria's Secret.

While Shayk might have pulled the wool over the eyes of her fellow models and press, she's not the first model who has walked the runway with a baby on board (i.e., those children have completed a task I can't even dream of achieving.) IB Times reports that three other models have done the same thing prior to Shayk (Alessandra Ambrosio, Lily Aldridge, and Doutzen Kroes).

Whether it was a secret or not, you have to say it's pretty great to see pregnant models participate in the show. While people have criticized the show for it's lack of representation of women's bodies, it is nice to see that expecting mothers are included in such a highly-watched show. More often than not, it feels like there is a social perception that a woman's pregnant body can't be sexy. Well, these women are proving that stigma to be 100 percent incorrect. Not only are they showing that a pregnant woman in an appearance-based industry can still work, they're also showing that they can still — forgive me — work it.