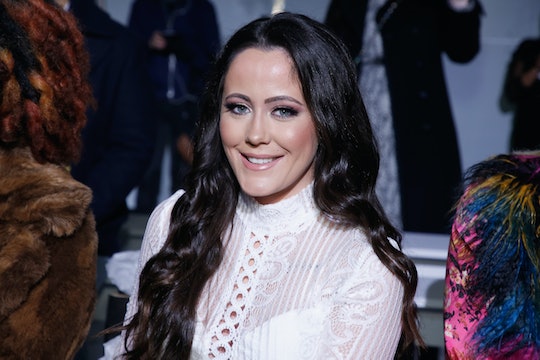 Jenelle Evans' reality TV journey started on 16 & Pregnant in 2010 when she was pregnant with her first child, Jace. Fans have since watched her grow up over the past nine seasons of Teen Mom 2, but that might all be coming to an end. Based on her recent family drama, people are probably wondering if Jenelle Evans was fired from Teen Mom 2. According to a recent statement from MTV, that could be the case.

Last week, it was reported that Evans' french bulldog, Nugget, was allegedly shot and killed by her husband, David Eason. He reportedly shot Nugget after it "snapped" at their 2-year-old daughter, Ensley, according to Us Weekly. This had people upset for obvious reasons, more than 200,000 people (and counting) have signed an online petition to get justice for Nugget. And because of this, people had been now calling for both Evans and Eason to no longer appear on Teen Mom 2. And it's likely that fans are not going to see Evans on the next season of Teen Mom.

"MTV ended its relationship with David Eason over a year ago in February 2018 and has not filmed any new episodes of Teen Mom 2 with him since," an MTV spokesperson told Romper in a statement. "Additionally, we have stopped filming with Jenelle Evans as of April 6, 2019, and have no plans to cover her story this upcoming season."

Evans and Eason have not yet responded to Romper's request for comment.

Evans has been on the franchise for the past nine years, and fans have witnessed some of her most intimate moments of her life. People watched her give birth to her son, Jace, on 16 & Pregnant in 2010, and then welcome her second son, Kaiser, into the world with ex-boyfriend, Nathan Griffith, in 2014, according to Us Weekly. A year later, Evans began dating Eason, and announced in 2016 that she was expecting their first child together. After Evans gave birth to Ensley in January 2017, the couple married nine months later in September, according to Us Weekly.

Throughout this past season of Teen Mom 2, fans have watched Evans battle for custody of Kaiser and get in to some arguments with her fellow Teen Mom 2 cast members, according to Too Fab. Things even reportedly got a little heated during the taping of the reunion for this season. According to The Hollywood Gossip, Evans reportedly "stormed off the stage" during the reunion, and the cast's interview segments had to be taped separately. She even hinted in an Instagram post in April that she wasn't happy with what happened at the reunion. "After this stressful reunion, I've been put through the ringer," she wrote in the caption. "To trust an entire group of people for years then they turn their back on you and treat you like a puppet is beyond words."

It's unclear what the future holds for Evans or her relationship with Eason, and it doesn't sound like fans will get more answer now that Evans won't be featured on Teen Mom 2 moving forward. But Evans will likely continue to update fans about her life on social media.