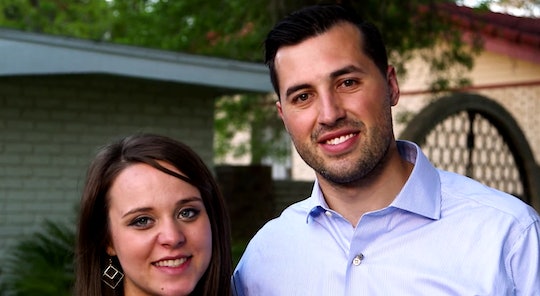 July has been a very exciting month for the Duggar family. So far, Josiah Duggar's wedding special with his now-wife, Lauren Swanson, aired on TLC's website. And just a few days after this special aired, his sister, Jinger Duggar gave birth to her first child. Given how close both of these major events were together, fans likely have had to wonder at some point — was Jinger Duggar at Josiah's wedding? Or did she stay home in Texas as she waited for her daughter to arrive? Well, from the looks of it, all signs point to one answer — yes.

As previously stated, the newest addition to the Duggar family is finally here. On Thursday, July 19, Jinger and husband Jeremy Vuolo, welcomed their daughter, Felicity Nicole Vuolo, according to Us Weekly. And now, as the new family of three enjoys their time together, fans can't help but wonder what Jinger and Jeremy were doing in the days leading up to Felicity's birth — like if they attended Josiah and Lauren's wedding, which was held on June 30, according to In Touch Weekly.

Although the new season of the Duggar family's reality show, Counting On, airs next week on July 30, TLC has already shared Josiah and Lauren's wedding special online. But those tuning in to the special to see Jinger and Jeremy might be a little unsuccessful; throughout the entire 20-minute special, which focused on only the ceremony and not the reception, Jinger and Jeremy are nowhere to be seen. Therefore, people can see why some might have suspected that Jinger and Jeremy didn't show. But, lo and behold, there is evidence that Jinger and Jeremy were there.

The Duggar fan account, Love Duggars Forever, shared a photo of Jinger and Jeremy, reportedly taken at Josiah's wedding reception, earlier this week, with Jinger's bump in clear view. And in another photo taken from the wedding reception and shared on the Duggar Family's website, Jinger can be seen in the bottom right corner, wearing the exact same dress in the photo shared by the Duggar fan account. Jinger herself might have even spilled the beans that she attended her brother's wedding.

In a photo, shared to her Instagram account on July 2 (two days after Josiah's wedding), Jinger wears that same black dress, posing next to her brother, John-David and his partner-in-courtship, Abbie Grace Burnett. In addition to these photos, Jinger's brother-in-law, Ben Seewald's parents shared a photo on Instagram of Jinger eating lunch with family members and friends, one day after Josiah's wedding, clearly indicating that she was in town.

If Jinger was keeping her presence at the wedding a secret, it's understandable why she might've chosen to do so. At the time, Jinger was in the third trimester of her pregnancy, likely in week 36 of her pregnancy (based on her pregnancy updates) and had to travel from her new home in Texas to Arkansas, where Josiah's wedding was held, according to People.

Although traveling during pregnancy is safe for most women, pregnant women are not recommended to travel past 36 weeks of pregnancy, according to the American College of Obstetricians and Gynecologists. This is recommended because women could go into labor early, therefore taking a risk of going into labor while on vacation and away from their doctors, according to ACOG. But, if Jinger did go into early labor in Arkansas, she would have had plenty of help from people experienced childbirth in the state (ahem, her mom and older sisters).

Although fans might have loved to see a little more of Jinger and Jeremy during Josiah and Lauren's wedding special, rest assured that they were there. And if fans need their Jinger and Jeremy fix, they can tune in to this season of Counting On, where their pregnancy journey will definitely featured on the show.