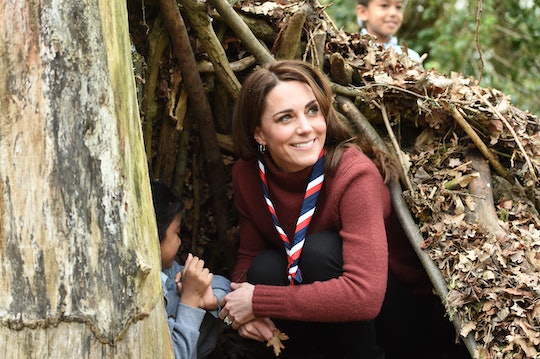 If there's anything synonymous with the royal family, it's probably tradition. Though there are some aspects of royal tradition we are very familiar with, such as their marriage and childrearing practices, there are others that are just being started and implemented. Such is the case with the latest news that Prince George, Princess Charlotte, and one day, Prince Louis, might be joining this very sweet extracurricular activity. Because as it turns out, Kate Middleton was once a Girl Scout and it sounds like she wants her kids to get involved in scouting, too.

When she was young, according to Entertainment Tonight, the Duchess of Cambridge was a Brownie (so cute!). But the sweetest part of all is that she hopes Prince George, Princess Charlotte, and Prince Louis will follow in her footsteps, though her two older kids are the only ones eligible to participate right now. According to People, during a visit to the Scouts headquarters in London on Thursday, Middleton said she'd like to sign her 5-year-old and 3-year-old up for it.

What's more, according to People, a fan who spoke with Middleton said the duchess wanted her kids to "follow in her footsteps." Lauren Noble, a 14-year-old who volunteered to help at the event, told the publication of her convo with the royal, "She said she would like them to go into the scouting community because she loves what it stands for — that it’s a very open and inclusive way into life... she said it would be a great thing for them to get involved in."

But that's not even the cutest part. Marie Claire reported that not only was Middleton in the Scouts, she was actually a pretty good member, too. Apparently, according to Marie Claire, Middleton was "obsessed" with earning badges when she was young, and she and her sister were super active in the Scouts.

Katie Nicholl, a royal expert, even wrote about Middleton's role in the Scouts, as PureWow reported, and how she even signed Pippa up for Brownies herself in her book, Kate: The Future Queen:

In their uniform of brown culottes and yellow sashes, the girls made their Brownie Guide Promise to be good and help others. With three fingers raised and a toadstool in her left hand, a demure, eight-year-old Kate pledged, "I promise that I will do my best to love my God, to serve my Queen and my country, to help other people and to keep the Brownie Guide Law." Once she became a fully fledged member of the troop, she was determined to collect as many badges as she could. Kate had no problem getting her housekeeping badges; she knew how to brew a pot of tea and boil an egg.

But the family ties to the Scouts go even deeper than that, as Queen Elizabeth was not only a Scout herself, but also a Patron of the Girl Scouts, according to Southern Living.

Before she was Queen, Elizabeth participated in the Girl Scouts and loved it so much that a headquarters was even established at Buckingham Palace for her and her friends, Southern Living reported.

It's clear that Scouting runs deep in the royal blood, and for Prince George and Princess Charlotte right now, it's coming from both sides. It's encouraging and refreshing to remember that, despite having all the charms in the world, Kate Middleton is still a grounded parent who understands that learning important life and survival skills is important for everyone — even royal children.