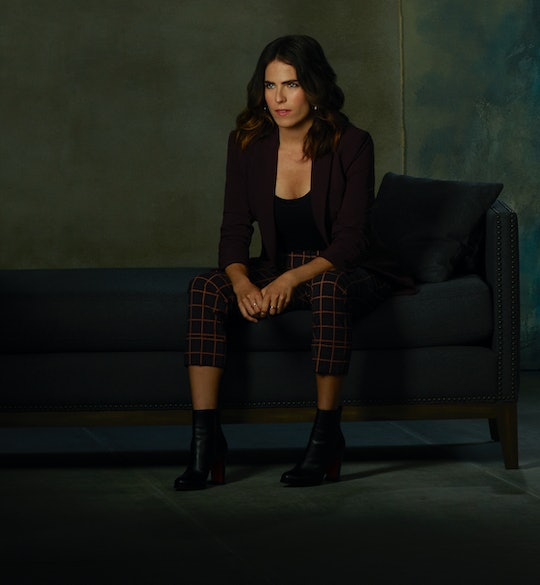 Laurel's Fate Is Uncertain On 'HTGAWM'

Another crisis reared its head at the very end of How to Get Away With Murder Season 5: Laurel Castillo (Karla Souza) suddenly vanished from a crowded sidewalk, and her son Christopher disappeared not long after. The season ended on that uncertain note, so the question of what happened to Laurel persists going into Season 6, which premieres on ABC on Sept. 26. Did Laurel run away? Was Laurel kidnapped on HTGAWM Season 6? The theories are endless.

The good news is that Laurel isn't dead. She appears in the Season 6 trailer sitting with the rest of the crew, all of them reeling from the realization that the FBI knows about the many, many murders they've committed. That could be a sign that Laurel's disappearance was short-lived and not as dire as it appeared. But it's difficult to pinpoint when in the season the scene from the trailer happens; it could be from the premiere, or it could be from the middle of the season. It's anyone's guess what happens in between Laurel going missing and reconnecting with the other characters.

But fans have done plenty of speculating. There are a few potential explanations for Laurel's absence and any of them could be true.

It's impossible to say with any certainty ahead of the premiere what happened to Laurel, but there are three big possibilities. One is that she was indeed kidnapped. The Castillo family have been antagonists for a while now, whether it's Laurel's dad Jorge (Esai Morales) trying to take her son from her or her brother Xavier (Gerardo Celasco) arranging for the murder of Nate's dad (Glynn Turman). They're never up to anything good, and it makes total sense that they might kidnap Laurel and Christopher. The motives may be hazy — maybe they're trying to bring her back into the familial fold — but it's still believable based on their history.

However, Laurel could have also chosen to leave. It would be needlessly cruel to bounce on Annalise (Viola Davis) with no warning, but perhaps that was part of her plan. Laurel could have framed her disappearance as a kidnapping to get people off her trail and have them looking for a perpetrator instead of looking for her. It's unnecessarily convoluted, but when has HTGAWM ever been simple? In Season 5, Laurel was insistent about wanting her son to have a more normal life than she did. At this point, the only way that's going to happen is if she moves far, far away.

On the other hand, there could be a completely different explanation. Laurel could be in hiding and working with the FBI to bring down her brother. Again, that doesn't account for the suddenness of her departure, but it's a potential answer worth considering. Like Wes (Alfred Enoch) before her, Laurel could even be trying to strike a deal with law enforcement to keep herself out of jail while the rest of the Keating crew are hauled in for their many, many indiscretions.

But what happened to Laurel is still a mystery, because all of that is mere speculation. The good news is that viewers don't have to wait much longer for answers.

How to Get Away with Murder airs Thursdays on ABC.