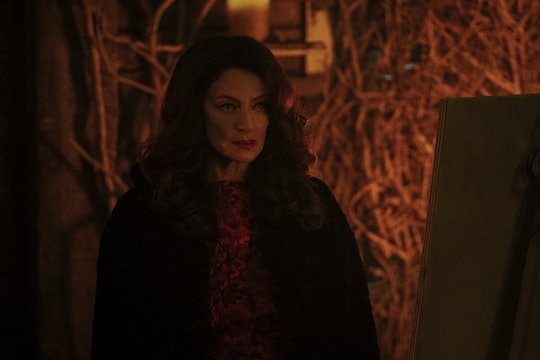 For all of its witchcraft and wonder, The Chilling Adventures Of Sabrina feels eerily real. We don't all have to ward off demons in the forest. But you have to admit that a chill goes down your spine picturing a dark, cold walk alone. Plus, we've all had interactions with an authority figure that were less than warm and fuzzy — not unlike Miss Wardwell/Lilith/Satan's Mistress. So it's natural to wonder if Lilith from Chilling Adventures Of Sabrina is real. Before we knew she was officially Madame Satan she was Principal Mary Wardwell at Baxter High. A lot of the series includes biblical and mythological references — so who was Lilith?

More Like This
Nick Scratch Is An Important Warlock On The Chilling Adventures Of Sabrina
What To Stream Right Now For Kids Who Love History
Everything You Need To Know About The Rugrats Reboot
Exclusive: Cookie Monster Puppeteer Tells Us Why Kids Will Love His New Show Donkey Hodie

According to the Jewish tradition, she was Adam's wife before Eve, made from his same clay, not his rib like Eve was (according to Abrahamic religions). That makes her Adam's equal, unlike Eve who was framed as Adam's subordinate. It makes sense then, that she's considered by some to be the "world's first feminist." But traditionally, she's been depicted as a female demon associated with the night, lust, and child-murder.

As one legend has it, she refused to serve Adam and was thus either banished from The Garden of Eden or she decided to leave herself. Another says she was banished for having sex with archangel Samuel. Still other legends claim she was the wife of "greater demons" like Asmodeus. Whoever she is, she's my kind of woman. At least she was before I learned that she's also associated with "storms, disease, illness and death."

Whatever she represents to you, in the Chilling Adventures of Sabrina Lilith is a villain I love to hate. That's mostly because in her present day form on the show she's portrayed by Michelle Gomez, who looks like she was born to play a villain and knows it. Gomez talked to The Huffington Post about her tendency to play distinctly dark roles in the middle of filming Season 2 of the show.

"It helps having this face. I was clearly born to play witches and b*tches for eternity," she said. "Especially when it comes to screen, a lot of the time you’re cast by the way you look." While she definitely has a great resting witch face, I'd say there's more to her deliciously villainous roles than her visage.

"Looks aside, perhaps why I’ve had success with playing villains in the past is because I don’t see them as villains," she continues. "I see them as your worst best friend. I enjoy working out why they are the way they are. We’re all products of our existence and the sum of our choices, and if you continually make bad choices you’re inviting some darker consequences."

We all have some evil in us, because as Gomez explains, even manipulation is evil. Be honest — you've used charm to get something you wanted before, right? Well then by Gomez's standards you're just like Lilith. "I’m able to hopefully give her some charm and likability, and that then gives the character some power to wield ― the power of manipulation."

But I don't think people necessarily need to shy away from power. As Zelda says to Father Blackwood when she confronts him about how he's written Lilith in the Academy's play, "I don't recall her wondering helplessly in the wilderness. She provided for herself like a survivalist." So embrace your inner Lilith, ladies. Life is a forest and we're all just trying to survive out here.