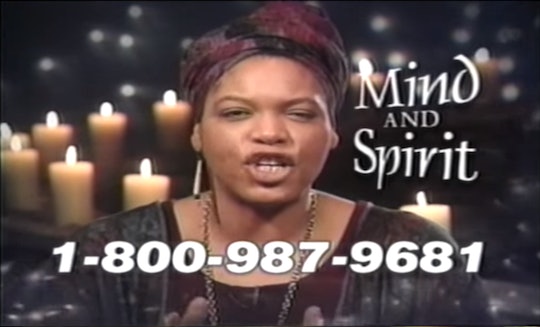 Was Miss Cleo Really Psychic? She Actually Never Claimed To Be

On Tuesday afternoon, TMZ reported that Psychic Readers Network spokeswoman and '90s infomercial star Youree Dell Cleomili Harris died from cancer at a Palm Beach County hospice at age 53. Anyone who saw one of her ads will no doubt fondly remember her catchphrase, "Call me now for your free reading!" But was Miss Cleo really psychic? The truth is, although she claimed to have some supernatural abilities, she didn't like to use that word.

In a 2014 Vice interview, Cleo said that she studied for 30 years to become a mambo, the Haitian term for a voodoo high priestess. But she said her employers didn't want to use that term, "because the word voodoo scares just about everybody." In 2006, she told The Advocate that she was "more a shaman, an elder in a community who has visions and gives direction to people in their village." Cleo did actually take calls for the now-defunct hotline for a couple of years before becoming the face of the company, and later performed readings on live call-in shows that were filmed and turned into half-hour ads for the network. After the Federal Trade Commission filed suit against Cleo and the Psychic Readers Network in 2002, she struck out on her own, giving private readings to international clients.

Miss Cleo's reputation suffered when the FTC charged her and her employers with deceptive advertising and billing practices. Her name was eventually dropped from the complaint when it was discovered that she was merely a figurehead, and the owners settled the case, but it's her name that will be forever linked with the shady business. "I never went to jail; I didn’t own the company," Cleo told Vice, repeating what became her mantra in the decade following the debacle. Cleo also drew criticism when it was alleged that she faked her Jamaican accent. Cleo was of Jamaican descent, but grew up in the United States, and although she was encouraged to play up her patois for the camera, she maintained that her accent was real, and she'd been taught to downplay it by her parents. "We only chat like that with family. In other situations, I can put on what they call a 'little valley girl accent.' If I have to pay a bill or make an arrangement, honey, I don’t do it in patois."

Cleo led a fascinating life off-camera, too. She was an accomplished playwright before her hotline career, and in 2006, she came out publicly as a lesbian. She told The Advocate that she'd always been out to her parents, but she was briefly married to a gay man in her youth "so that everybody would leave us alone." The two conceived a daughter together, and Cleo eventually had one more daughter with another partner. She went on to have two long-term relationships with women, but ended things with her second wife after the the woman reportedly became abusive towards her and her daughter. She remained celibate for a long period after that for her daughter's sake. A rep told TMZ that Cleo passed away after her colon cancer spread to her liver and lungs, and that she was surrounded by family and friends at the time of her death.