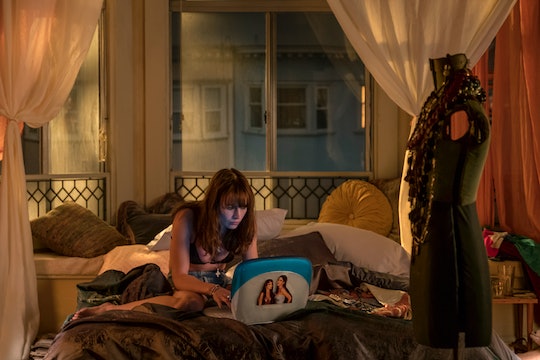 Despite her hardships, CEO and #Girlboss Sophia Amoruso has an inspiring story. She started Nasty Gal as an eBay store and eventually went off on her own and ran a company worth millions. It wasn't an easy road there, though. In her 2014 memoir #Girlboss, Amoruso detailed the struggles she went through while creating her empire. Netflix's new show, also named Girlboss, is a loose adaptation of her story. Fans see in the trailer that Sophia's eBay account gets shut down, but did that really happen? Was Nasty Gal really suspended from eBay? Girlboss is a close retelling of Amoruso's autobiography.

Girlboss is not a documentary nor a biopic, but it is heavily based on Amoruso's life. In the trailer, the titular character — also named Sophia — starts an eBay account selling vintage women's clothing that becomes wildly successful. Sounds familiar, right? Well, like Amoruso's story, it's not smooth sailing. At some point, eBay begins to "turn" on her. As one character warns her, once she loses eBay's trust, it's hard to get it back. From then, Sophia decides to leave eBay behind and start her own site. Those who are familiar with Amoruso's life knows that she too left eBay, but it was on as such bad terms as Girlboss makes it seem?

While Girlboss isn't a straight retelling of Amoruso's experience, her account was indeed suspended. She explained in the "How I Became a #GIRLBOSS" chapter of her memoir that in 2008, two years after she opened the store, she was considering leaving eBay, but the online giant made the decision for her. They suspended her account because she put the URL of her future site in the feedback area for customers. In Amoruso's words, she was suspended "doing what [she] did best — getting free marketing."

From the trailer, it appears that Girlboss' Sophia may have needed to leave eBay due to bad reviews. Turns out, the real Sophia had to deal with trolls as well. For her, it was just another reason to go off on her own. Luckily, cutting losses with eBay didn't stop Amoruso — even though she couldn't take her customers with her. She lost all her customers' email addresses, but she still had her 60,000 MySpace friends to market the site to. As Amoruso went on to explain, on the first day of nastygalvintage.com (at the time, nastygal.com was a porn site), everything sold out. Amoruso's story, and Girlboss, shows that a failure can result in an even bigger success later.