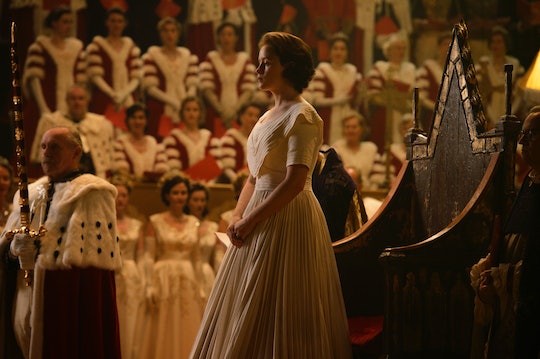 Was Queen Elizabeth II's Coronation Televised? 'The Crown' Shows The Start Of Her Reign

Netflix's latest period drama The Crown offers a glimpse into the early part of Queen Elizabeth II's reign. She ascended the throne at just 25-years old, after the death of her father, King George VI. And while television had been around since 1927, Queen Elizabeth II was notoriously camera shy, refusing to allow cameras into Westminster Abbey for her 1947 wedding to Prince Philip. So when her coronation day came in 1952, there was some dispute about whether or not television networks would carry the event. So was Queen Elizabeth II's coronation televised like it was on The Crown? An entire overseeing committee called the Coronation Commission, chaired by Prince Philip, was instated to tackle the question.

While Queen Elizabeth didn't wish to be televised, many high-ranking members of court also wished to keep the ceremony private, in an effort to honor the traditions of the pre-war caste system. Traditionally, coronations were an exclusive event to which only the upper echelons of British society were extended invitations. It was a mark of status to be permitted to attend the coronation, and televising the event would have broken down a very old class barrier. Initially, a compromise was reached in which it was decided that cameras would only be permitted "west of the organ screen" in Westminster Abbey, so that the procession could be viewed on TV, but the actual ceremony could be kept private.

Eventually, however, the Queen's advisors convinced her to allow the entire coronation to be televised, with the condition that she wouldn't be filmed in close-up, much like how it played out in Season 1 of The Crown. The only part of the ceremony that was cut was her anointing, which was deemed too sacred to broadcast en masse.

Often disputed are the effects of the coronation broadcast on British TV consumption. However, it did draw a staggering 20.4 million viewers (this amounted to an average of seven people watching per TV set in the UK at the time, not counting children), and it contributed to the erection of TV transmitters in more remote parts of the UK, giving TV a truly national reach. It also coincided with a general boom in TV viewing. So suffice to say, this was something the general public very much wanted to see.

Queen Elizabeth II's coronation was one of the first events in the UK to earn large-scale "viewing parties," with gatherings held in churches, hospitals, and festival halls. In fact, the viewing audience nearly doubled the listening audience, who was tuning into radio broadcasts of the coronation. But mostly, televising the coronation marked the first time rural and common British people could participate in the event, breaking down class barriers in British society in a large-scale way.

Like Philip tried to explain to Elizabeth in The Crown, opening herself up to the public in such a way would make the people of Britain love her all the more, which is precisely what ended up happening. This is where our obsession with the royal family truly began.