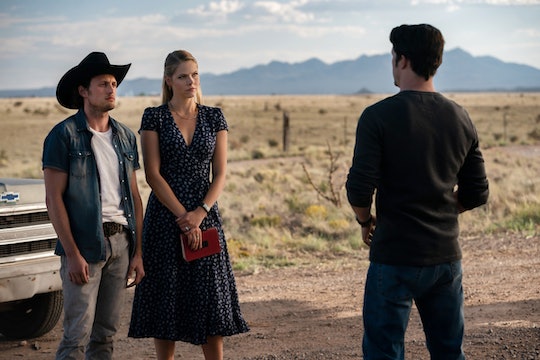 'Roswell, New Mexico' Fans Are Looking To The Future

With the debut season of Roswell, New Mexico winding down, fans still have plenty of questions. There’s so much more to learn about the aliens’ past, including how their ship landed in Roswell, and what the military knew about their existence. Plus, with all the romances still hanging in the balance, fans are anxiously looking forward to another season. So was Roswell, New Mexico renewed for Season 2?

Update: The CW has confirmed Roswell, NM will return for a second season, via TV Line.

As of now, The CW has not released information about the fate of Roswell, New Mexico, but according to Cancel Bear, the show’s ratings have been steady all season, so there is a good chance it will be renewed. Earlier this year, the network announced renewals for ten of its current series, out of which three shows — Legacies, Black Lightning, and DC Legends of Tomorrow — share similar ratings numbers with Roswell, New Mexico. So, if The CW bases its renewal decision on ratings alone, the series should come back for another season.

The good news is, while the network has yet to make an announcement, Roswell, New Mexico producers are already mapping out a second season. In an interview with Assignment X, showrunner Carina Adly Mackenzie said that there’s still a lot more alien mythology that the show will explore. Right now, we’re really focusing on our small town, and what happened in our small town, but as the world gets bigger throughout the season, those questions start to come up, and will be answered,” she explained. “Our aliens don’t know anything about where they came from, or why they are here. So we are going to be asking those questions.”

But the showrunners aren’t the only ones planning for Season 2. Cast members Nathan Dean Parsons (Max) and Michael Trevino (Kyle) are all on board for another season, and when talking to Collider, they both discussed their character’s future paths. Trevino said that while he doesn’t know any story secrets for next season, he does think Kyle will have a hard time, given his journey in Season 1. “To even guess where we would begin in Season 2 is difficult to say, but I would say that to continue from where he leaves off, at the end of this season, might be a bit of a struggle for him, moving forward,” siad Trevino. “After everything that he’s gone through, seen and knows, to start Season 2 from there, might be a bit of a struggle.”

Parsons told the outlet that he hopes to give writers some input into Max's story arc if the series gets renewed. “Hopefully, if we do end up getting a Season 2, we’ll be able to sit down with the writers and producers and say, “All right, let’s talk through some details,” said Parsons. “Let’s talk about what the plan is, at least for the first half of the season, just so we have an idea of where to start and what we can build towards, going forward.”

For now, until The CW makes an official renewal announcement, Roswell, New Mexico fans (as well as the cast and crew) will just have to keep their fingers crossed.