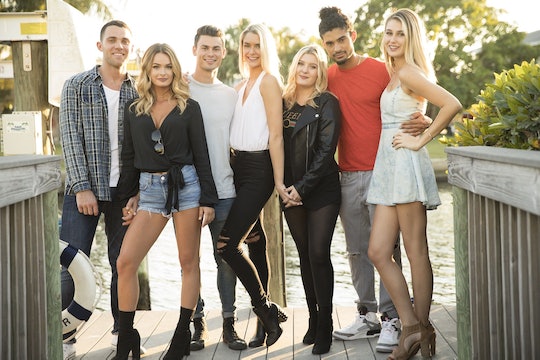 Here's What We Know About 'Siesta Key' Season 3 So Far

Siesta Key, MTV's Florida-based, Laguna Beach-inspired reality series wraps up its second season on Apr. 2, leaving fans to wonder whether Siesta Key was renewed for Season 3. There's no official word yet on whether MTV plans to re-up the series, but the fact that they moved forward with a second season after the first was mired in so much controversy is probably a good sign.

According to an October 2017 Deadline report, Siesta Key "ranks as MTV’s top performing new series since the summer of 2014," and, at the time, it was the top performing original cable program in its time slot in the young demographic. That bodes fairly well for the show. Ratings for Season 2 did drop slightly, but Siesta Key still hovers around half a million viewers per episode, so its numbers have remained mostly steady. For comparison, MTV's Jersey Shore reboot Jersey Shore: Family Vacation netted well over a million viewers for its second season after 2.5 million viewers tuned in for the series premiere.

Furthermore, Season 2 of Siesta Key was announced in December of 2018, just a month before it aired, so the fact that MTV has yet to make an announcement about the fate of the show probably isn't cause for concern. I'd wager to guess that fans won't hear about a Season 3 confirmation until closer to a potential Season 3 premiere date.

Siesta Key, which comes from the producers of Laguna Beach and utilizes the same premise, follows a group of friends as they summer in the titular barrier island off the coast of Sarasota. Love, heartache, and drama predictably ensues, but the series premiered with some pretty stomach-churning controversy in 2017. According to People, a local premiere party had to be canceled after one of the cast members allegedly fielded death threats over a viral video depicting animal torture.

The video showed three men, one of whom was apparently a friend of central cast member Alex, pointing and laughing as a shark was dragged to its death behind their fast-moving boat. Alex's father, chiropractor Dr. Gary Kompothecras, came up with the idea for the series, which positioned his son as ~the Lauren Conrad of the group~, if you will. A Facebook group called "Boycott Siesta Key MTV" formed and a protest was planned for outside the premiere party, which would have included a meet-and-greet with the cast and Q&A session.

"I had absolutely nothing to do with the shark video," Alex wrote in a since-deleted post, according to Rolling Stone. "Yes he’s a friend of mine, but no I don’t agree with what he did. Check your facts before you go posting on my page. Thanks."

The three men in the video — Michael Wenzel, Robert Lee Benac, III, and Spencer Heintz — each faced two felony counts of aggravated animal cruelty, according to NBC News. In addition to that third-degree felony, Wenzel and Benac also faced a misdemeanor count of illegal method of take for the shark.

The show seemed to recover from that scandal however, and snagged an additional eight episodes for its first season after the initial 10-episode order. Whether it can continue remains to be seen.