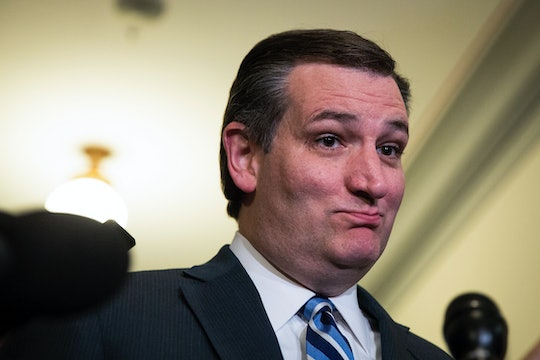 Was Ted Cruz Behind The RNC Rules Vote? Trump Supporters Think So

A somewhat expected bout of drama broke out during the first hours of the first day of the Republican National Convention in Cleveland on Monday, when anti-Trump delegates collected enough signatures to force a vote on the Convention's rules. The rouse immediately prompted an obvious question: Was Ted Cruz behind the RNC rules vote? A large portion of Trump's supporters seemed to think so.

The trouble began when a cohort of anti-Trump delegates collected the requisite number of signatures needed to force a vote on the rules of the Convention, according to CNN. The rules, which are agreed upon by the rather antiquated “voice vote” method in which everyone in the room shouts loudly, were affirmed at 4 p.m. local time, according to CNN.

But then, just moments later, a second voice vote became necessary amidst protests that the first voice vote was an auditory tie. The anti-Trump contingent wanted a “roll call” vote in which each state would have the opportunity to accept or reject the Convention's rules. As reported at CNN, the roll call vote failed to become a reality because “the convention chairman then said there were not enough signatures to force the roll call.”

Understandably, some believe that Texas Sen. Ted Cruz was behind these efforts to undermine presumptive Republican nominee Donald Trump, not least because Trump has called Cruz, on separate occasions, “wacko,” “unhinged,” and “desperate.” In turn, Cruz has called Trump a “pathological liar” and “a narcissist at a level I don't think this country's ever seen.”

The truth is, though, that Cruz didn't organize the scuffle at the RNC, at least not directly. The brief melee was instigated by allies of former Virginia attorney general Ken Cuccinelli and Utah Sen. Mike Lee, who have been spearheading the efforts to change various rules related to how a Republican presidential candidate is elected. According to Lee, the forced vote at the Convention isn’t just about the convention; it’s about forcing a change to the entire electoral process.

"No, absolutely not, this is about the rules of the convention," Lee told CNN. “...This is not about Donald Trump, this is about having a good, fair rules process.”

As for Cruz's level of personal involvement in the ploys against Trump, the answer is unclear. On the one hand, Cruz is not officially affiliated with the Never Trump, Free the Delegates, or Delegates Unbound movements, which have sought for months to unbind delegates from being forced to vote for Trump under the idea that delegates should be allowed to vote their conscience.

On the other hand, Free the Delegates was co-funded by Kendal Unruh, who is a longtime Cruz supporter, according to The Washington Post. Similarly, Regina Thomson, executive director of Free the Delegates, is both a Colorado delegate and Ted Cruz’s state director in Colorado. After the roll call vote was denied on the RNC floor, a frustrated Thomson told CNN that “the leadership just steamrolled right through the fact that the whole place was calling for a roll call vote."

Whatever the case, it appears that the anti-Trump movement pretty much fizzled out, and we're now rounding the final corner on the bizarre road leading to Trump's nomination.