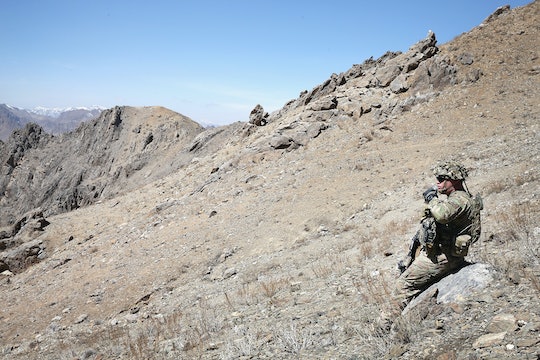 Was The Afghanistan Bombing Successful?

Last week, the Pentagon announced that the United States military had dropped a Massive Ordnance Air Blast bomb (MOAB) in Afghanistan in an offensive move against ISIS. The bomb, nicknamed the "mother of all bombs," has become the largest non-nuclear bomb the United States has ever used in combat, and speaking to reporters following the strike, President Donald Trump called it a "very, very successful mission," according to The Hill. But was the Afghanistan bombing successful? That seems to be a difficult question to answer — mostly because so much is unclear about what actually happened, and what it means.

After the bomb was dropped in the Achin district of Afghanistan, targeting what is said to have been a network of ISIS tunnels in a remote, civilian-free area, local officials said that 36 ISIS members had been killed as a result of the blast, according ABC News. On Saturday, however, an Afghan government official said that the death toll had since risen to 94. If the only criteria for a mission's success is the number of militants killed, then the fact that nearly 100 ISIS members are dead should probably be a good thing. But the implications of military strikes are almost always much more complex, and in a country like Afghanistan, where the United States military has been involved in its longest foreign war in history, according to The Washington Post, it's not surprising that the dropping of the MOAB wasn't as simple as it may have first seemed.

It's unclear whether Trump authorized the bombing, or how involved with the mission he actually was, but the fact that he now appeared to be in favor of increased military involvement in Afghanistan seems to be a change from his previous position. According to The Independent, Trump tweeted in 2011 that the United States was "wasting lives and money in Iraq and Afghanistan," and in 2013, he tweeted that instead of spending money in Afghanistan, the government should "rebuild the USA" instead. But despite his controversial "America First" policy based, at least in part, on the idea of staying out of the Middle East, Trump now seems to be moving toward an entirely different perspective, according to CBS News. And it's not just the MOAB: the president responded to a Syrian gas attack with a missile strike earlier this month, and has also backtracked on a number of other issues, according to BBC News, like his position on China as a currency manipulator, and the value of NATO.

What that seems to suggest is that, well, it's not entirely clear what Trump actually thinks about a number of key issues, and so far, it's also not clear what he thinks about Afghanistan beyond claiming that the military has done a great job. Beyond that, it's also not entirely obvious exactly what the overall purpose of using the MOAB bomb was. But Gen. John Nicholson, the U.S. Commander in Afghanistan, defended the decision as being a tactical one. According to CNN, he told reporters that the MOAB was "the right weapon against the right target," and that "it was the right time to use it ... on the battlefield."

Not everyone agrees, though. For one, critics have said it was a big, expensive bomb without much actual yield. According to CNBC, the 21,600 pound MOAB reportedly costs about $16 million, and was said to have been originally designed as "a non-nuclear deterrent against former Iraq dictator Saddam Hussein." And while there's no denying that wiping out ISIS is important, the group's numbers are relatively low in Afghanistan, especially compared to those of the Taliban, a group the United States has long been battling. Compared to the estimated 25,000-strong Taliban in Afghanistan, officials believe there to be between 700 and 1,500 ISIS members in the region, according to NBC News. And even at the height of its power in Syria in Iraq in 2014, ISIS still wasn't consider nearly as powerful.

Of course, a bomb like the MOAB seems pretty much as valuable for making a statement as it is about actual physical destruction, so it might be reasonable to assume that the military was trying to send a message to ISIS about what it's capable of. But if it were, it certainly wouldn't be the first time the United States military has dropped massive bombs on Afghanistan without much long-term success: according to The Guardian, Daisy Cutter bombs were meant to help wipe out Al Qaeda and Osama bin Laden in the Tora Bora mountains in 2001, and were meant to be a sign of the United States' impressive military power. But the U.S. military effort in Afghanistan is still clearly ongoing and complex — and certainly unlikely to be significantly altered by the dropping of the MOAB.

What it did appear to do, at least, was terrify those in surrounding villages. According to CNN, one local resident said that the blast was an "extremely loud boom" that shattered the windows in his house, and felt "more powerful than any other bomb" he'd experienced "in the last 30 years of war in Afghanistan." Another said he and his family "were unable to see each other at home because of the excessive dust inside the room," and according to The Guardian, Achin Mayor Naweed Shinwari said his family "thought the end of the world had come" after the bomb hit.

The impact on civilians is one reason why Former Afghan President Hamid Karzai condemned the bombing Monday, according to TIME, arguing that the use of the MOAB was "an immense atrocity against the Afghan people." Karzai also criticized the Afghan government for coordinating the strike, and said,

How could a government of a country allow the use of a weapon of mass destruction on its own territory? Whatever the reason, whatever the cause, how could they allow that? It just unimaginable.

Regardless of whether the bombing was justified, what seems apparent is that, in using it, the United States has further cemented its ongoing involvement in the region. And it may also signal an increased military presence: according to Reuters, Nicholson said back in February that he required "a few thousand" more troops in order to properly advise Afghan forces on the ground. Currently, around 8,400 U.S. troops remain in Afghanistan since the United States-led war in the country first began in 2001.

That reality, coupled with the recent bombing, suggests that Trump will soon have to make a decision about what his policy on Afghanistan actually is. But like so much of the situation in the Middle East already, it's likely that whatever happens, it won't be straightforward.