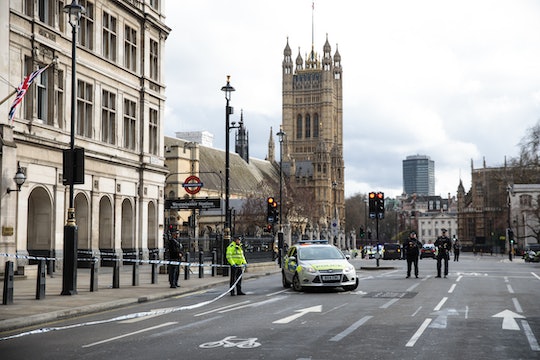 Was The Attack At The Westminster Bridge Terrorism?

On Wednesday, London police shot an assailant who stabbed a police officer inside the perimeter of the British parliament, according to Al Jazeera. The perpetrator first plowed into a crowd on the Westminster Bridge before he got out of his vehicle with a knife and attacked the officer. The incident has many people asking: Was the attack at the Westminster Bridge terrorism? The Associated Press reported that London police is treating the attack like "a terrorist incident until we know otherwise."

According to the Daily Mail, the knife-wielding attacker hit more than 12 people gathered on the bridge before crashing a four-wheel drive vehicle the railing outside of the Houses of Parliament. Al Jazeera reported that several people wounded in the bridge attack were lying on the ground, with some bleeding heavily and seemingly unconscious. House of Commons leader David Lidington had told members of Parliament that an ambulance was on the scene to "removed the casualties." One woman has died in the attack and others has been left with "catastrophic" injuries, the Daily Mail reported.

Witness Martin Pearce told Al Jazeera that he saw at least five victims, including one man being tended to by medics and a woman who was "stabbed or shot. ... There was a lot of blood," Pearce reported.

According to The Guardian, police shot the attacker two to three times as he tried to forced himself into the House of Commons. Eye witnesses, including a sketch writer for the Daily Mail, reported seeing a thick-set man wearing black enter into New Palace Arms and stab a yellow-jacketed police officer. The attacker ran about 15 yards towards the Houses of Parliament entrance before he was shot by law enforcement. The condition of the offender is unknown at this time.

Parliament has been locked down and British Prime Minister Theresa May was rushed off to an undisclosed location with plain-clothed police officers, according to the Daily Mail. The Guardian reported that police have asked people to avoid Westminster Bridge, Parliament Square, Whitehall, Lambeth Bridge, parts of Victoria Street, and Victoria Embankment up to Embankment Underground station.

According to the Daily Mail, Wednesday's deadly incident at Parliament has happened weeks after reports surfaced that the United Kingdom security services had stopped 13 potential terrorist attacks in less than four years. "The official threat level for international terrorism has stood severe, meaning an attack is highly likely, for more than two years," the Daily Mail wrote.