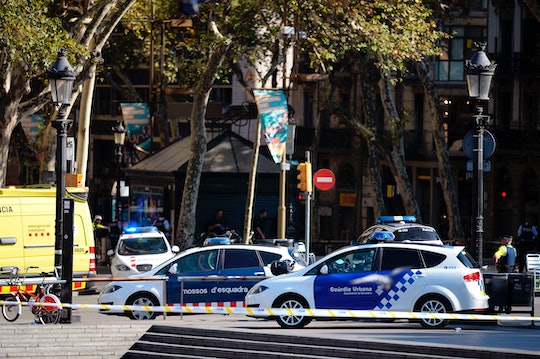 On Thursday, local media in Barcelona, Spain reported that a van crashed into "dozens" of people in the city center, killing at least two people and injuring several more, according to Catalan police. Was the Barcelona van crash terrorism? Barcelona police have only called it a "massive crash," according to Reuters, and no official has yet labeled the incident terrorism. According to unconfirmed reports, it is likely that the crash may have been an act of terrorism.

UPDATE: According to CNN, the Catalan police has said the Barcelona van crash was "most likely" terrorism.

UPDATE, 12:54 p.m. Eastern Time: The Associated Press reported Spanish police have called the Barcelona van crash a "terror attack" and that at least 13 people have been killed.

PREVIOUSLY: The Associated Press reported that a white van jumped a sidewalk and plowed into crowds of people gathered at Las Ramblas, a wide pedestrian market in the historic district known as an iconic tourist spot in the heart of Barcelona. Local newspaper El Periodico reported that the driver of the van fled on foot, while two armed men may have taken hostages in a nearby restaurant.

At this point, there are more unknowns than confirmations, such as the identities of those injured or killed in the Barcelona van crash, or the motivations of the terrorists who perpetrated the attack. What is known is that the incident has basically shut down Spain's second largest city.

Photos and video from the Barcelona van crash that came out on social media immediately after the attack show truly horrifying scenes as injured and bloodied pedestrians were strewn across the ground as police rushed to their aid. Since the attack occurred, the National Police has asked those on social media to stop sharing footage if they can, both out of respect for the victims' families and because it could compromise authorities' investigation. Additionally, Spanish newspaper El Pais has said that the driver of the van fled the scene on foot, Reuters reported.

Catalan police has cordoned off the area and have stopped all public transportation in and out of Las Ramblas. According to FOX News, the U.S. consulate has warned that Americans should avoid the area of the Barcelona attack.

Witnesses to the van crash have reported terrifying accounts of what they saw. One witness told TV3, "The van went at high speed and hit everyone it could. I saw people flying through the air and landing with blood." Other witnesses reported a "tidal wave" of tourists and pedestrians fleeing the scene trying to get out of the van's way and after the crash itself. Spanish Prime Minister Mariano Rajoy tweeted, “In contact with all administrations. Priority: tend to the injured in Las Ramblas and facilitate the work of security forces."

As the investigation and manhunt for the driver of the van continues, it remains to be see who will claim responsibility for this terrorist attack; it follows a disturbing trend of terrorists using vehicles to run down pedestrians.