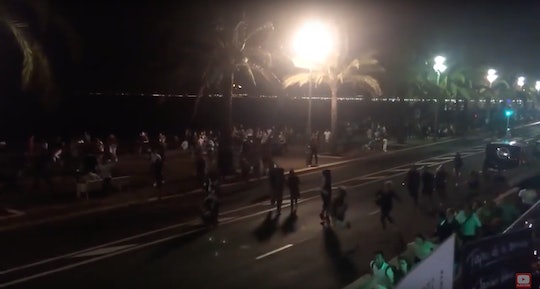 Was The Bastille Celebration Crash Terrorism? It May Have Been An Attack

At about 10:30 p.m. local time in Nice, France, a truck rammed into a group of people out enjoying a holiday, reportedly leaving at least 60 of them dead after the driver began shooting as well. French television channel BFM TV reported that the city is treating the incident as an attack, according to Reuters, making it seem as though the Bastille celebration crash may have been terrorism. Terrorists targeted the heart of French culture in a series of coordinated attacks in its capital city of Paris last year, so the fear is real and fresh in the minds of many across the globe.

Photos from the scene showed a cargo truck with a bullet-spattered windshield on its side and surrounded by armored police vehicles after it apparently plowed though a crowd at the Promenade des Anglais seaside walk, according to The New York Daily News. The carnage reportedly erupted after a fireworks display on Bastille Day, a uniquely French holiday during which the country commemorates the 1789 start of the French Revolution.

It's a now peaceful holiday, but witnesses described a chaotic, deadly scene. In a Twitter message to NBC News, Andrew Botros, summed up the situation he had seen as "horrific." "White truck literally racing through crowds of all ages," he wrote. "People either caught in path or forced to jump onto rocks over beach barrier."

Because the incident happened during celebrations of France's most significant national holiday — it's even also known simply as National Day — it's frighteningly reminiscent of recent terrorist attacks in the city. Last year, ISIS claimed responsibility for the November 13 "Paris attacks" that killed 130 people. One of the most striking aspects of the city-wide rampage — besides the dizzying amount of casualties — was the fact that the attackers seems to seek out the epicenter of French culture: bombings outside a soccer stadium during a match, shootings at popular nightlife spots on a Friday night, including bars, restaurants, and a concert hall.

And Thursday night, the horror runs just as deep: One witness told CNN, "You can see wreckage all along the way, a body, bicycles, street lamps and debris everywhere," while another reported seeing the hitting people, and then accelerating to mow them over. President Francois Hollande will meet with the Interior Ministry for emergency talks.

Last year's massacre in Paris was an attack on France, but it took vicious aim at the heart of the country's culture and what it means to be French. And the Bastille Day tragedy that French police are now definitively calling "an attack" seems to be no different, especially if it does turn out that ISIS or another terrorist organization was involved.