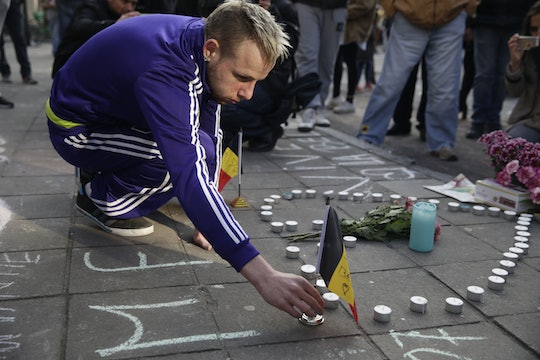 The terrorist attacks that rocked Paris last November let the world know, in no uncertain terms, ISIS had turned its focus toward Europe. Just days ago, Belgian authorities captured the last man suspected of helping orchestrate the Paris attacks in his hometown of Brussels, Belgium. Now, many are wondering whether the Brussels terror attack is connected to the Paris attack. Was the attack on Brussels by ISIS revenge for the arrest of one of its own? It's hard to ignore there's a likely connection.

The arrest last Friday of Salah Abdeslam, who has now confessed to his role in November's Paris terror attacks, might have set a plot in motion that led to today's Brussels bombings. During the arrest, police said they found heavy weapons and evidence of a terrorist network around him. The Guardian talked to Belgium's foreign minister who said Abdeslam admitted he was planning attacks on Brussels after his arrest.

ISIS, also known as the Islamic State, has claimed responsibility for the Brussels attacks.

Today's attack on Brussels could have been motivated by simple revenge or even an attempt by ISIS to prove its plots are more widespread than any single terrorist. Today's bombings prove the terrorist network is large enough pull off coordinated attacks across multiple European capital cities and that the Paris attacks are at least loosely connected to the Brussels bombings.

Police are also still trying to find two suspected co-conspirators of Abdeslam, Mohammed Abrini and Najim Laachraoui. Abrini grew up with Abdeslam in the Molenbeek neighborhood of Brussels along with several of the other Paris terrorists.

Regardless of how closely ISIS coordinated the attacks in Brussels and Paris, the two cities will forever share a collective shock and grief after terrorism caused so much destruction in their cities. A cartoon published in the French Newspaper Le Monde captures that common sadness so beautifully.

Officials now warn Europe and the rest of the western world to be on alert for additional attacks and to be aware that ISIS is no longer relying on inspiring lone wolves to act on its behalf. Instead, it is operating large, sophisticated networks intent on causing damage anywhere they find opportunities. French President Francois Hollande vows the response from Europe will be "calm, lucid, and determined" and will endure as long as necessary to defeat the terrorists.