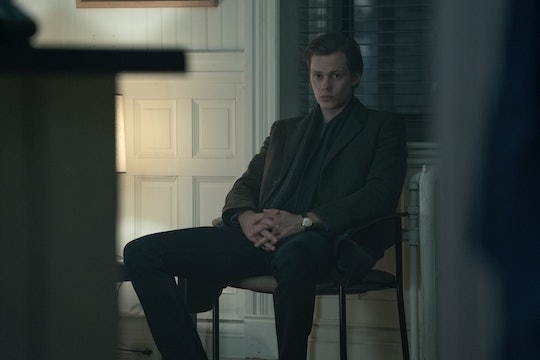 Fans Are Torn Over The Kid's True Nature On 'Castle Rock'

Castle Rock just ended its gripping debut season, and while the finale provided some closure, it also spawned a ton of questions. The question of The Kid’s (Bill Skarsgård) identity was left on an ambiguous note, and fans are coming up with their own theories about his true nature. He told Molly (Melanie Lynskey) and Henry (Andre Holland) that he was Henry Deaver from another reality, but was The Kid telling the truth on Castle Rock’s finale, or was he just manipulating everyone to advance his evil agenda?

Warning: Spoilers ahead for the Castle Rock Season 1 finale

According to the series’ show runners Dustin Thomason and Sam Shaw, whether or not you believe The Kid’s story is up to you. When talking to Esquire, they explained that his identity was purposely left open to interpretation, so that viewers could bring their own biases into the ending. “Naturally, the audience wants answers or explanations because it's uncomfortable to be confronted with events that seem to defy rational explanation,” said Shaw. "Part of the architecture of the season was — to construct a final episode around the question of whether or not Henry accepts the story. Depending on what the audience's point of view is about that story and about Henry's choice, it may be a tragic ending, or it may be a complicated but heroic ending.”

Throughout the season, The Kid was portrayed as an ominous character, and was often referred to as the Devil. And while he never physically caused harm to anyone himself, murder and mayhem followed him wherever he went. But in Episode 9, he tells his story to Molly, explaining how he was Ruth and Matthew Deaver’s biological son from another reality (the son from this reality died at birth). Not only that, but the André Holland version of Henry Deaver wound up in the Kid's reality as a child — explaining where Henry was all that time he can't remember.

But after seeing the Kid's sinister grin at the end of the finale, along with his terrifying face when out in the woods with Henry, the Kid’s backstory suddenly seems a lot more questionable. Henry apparently decided that keeping the Kid locked up and away from humans was the safest option — indicating he at least doubt's the Kid's story.

In an interview with Variety, Thomason explained that The Kid’s creepy face indicated his true age. “The truth is, that image in the end is just a very, very aged Bill Skarsgård, and so the monster you’re looking at is 300-year-old Bill, and so the question of whether they’ve been jumping back and forth in timelines — there are all sorts of questions that are raised in that moment.” But on the show, The Kid has only been in Castle Rock for 27 years, so Thomason’s revelation of a 300-year-old Kid just raises more questions.

On Reddit, fans have been sharing their own theories about the Kid’s (TK) identity. User Droidaphone theorized that the Kid was telling the truth, but that his reality jumping made him evil. “I believe TK is exactly who he says he is, with the only catch being that he is lying/omitting about him having done this more than once,” wrote Droidaphone. “TK is a Henry Deaver. But going over to another reality changes you. It seems to create a ripple of 'evil' around you.”

Redditor Loltaire717 opined that the Kid was telling the truth, but had just been stuck in Castle Rock for much longer than assumed. “Or...he is exactly who he says he is, but instead of crossing over to 1991, he crossed over to when the French girl ate her family and has been stuck in castle rock [sic] ever since? He simply lied about when he crossed over to, not from when or where. He’s been here 300 years.”

But as the showrunners planned, some fans are taking an opposite stance on his identity. Reddit user Reverand_Bugatti wrote, “Maybe he was really the Devil, and was able to manipulate Molly into believing him and in a sense manipulated us into believing him.” User Mellie84 theorized that The Kid was lying, writing, “I think episode 9 was a farce. None of it was real. I think The Kid is the devil. Perhaps he travels through universes by finding those that hear the schisma and when he finds the thinny he breaks through.”

The Kid’s true nature is still a mystery, but it’s exactly what the Castle Rock creators were going for. The finale may not have provided the closure you wanted, but the ambiguity of the ending does a good job of jogging the imagination. For fans, questioning the Kid’s identity keeps the Castle Rock conversation going, and for the series as whole, I think that’s a win.