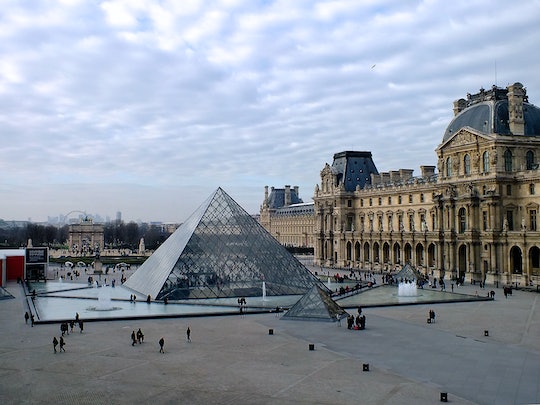 Was The Louvre Attack Attempted Terrorism?

The looming threat of terrorism in France has meant that the country remains under the state of emergency instituted by French President François Hollande following the deadly November 2015 attacks in Paris, and on Friday, it appears as though that increased vigilance may have helped thwart another attack. At about 10 a.m. local time, a man wielding a machete was shot by a soldier who was part of a security foot patrol at the Louvre museum's underground plaza, the Carrousel du Louvre. Was the Louvre attack attempted terrorism? Authorities have yet to confirm the man's identity or motive, but French Prime Minister Bernard Cazeneuve has said the attack was "terrorist in nature," according to CNN, and explained that a terror investigation was underway.

According to The Telegraph, the suspect was allegedly carrying two backpacks when he was stopped by the group of soldiers, who were patrolling the area. Police union spokesperson Yves Lefebvre said the suspect then took out the machete and tried to attack after allegedly shouting "Allahu akbar." When the soldiers were unable to subdue the man, one of the soldiers fired five shots, wounding the man in the abdomen. The suspect was eventually apprehended and remains in police custody. According to The Guardian, the man's backpacks were examined at the scene by bomb disposal specialists, but did not contain any explosives.

According to Reuters, about 1,250 visitors to the museum were kept inside the building for about an hour following the shooting, and then were instructed to evacuate. Despite the threat, witnesses told reporters that guards inside the Louvre handled the situation well, and that everyone remained calm. One museum visitor reported that patrons were informed of the incident by an announcement delivered in French over the museum's loudspeakers, then security guards began gathering museum visitors together into groups and had them sit away from the windows. The Louvre remains closed following the attack, and it is not clear when it will re-open.

Groups of armed guards like the one who stopped the attacker at the Louvre are now a common sight around Paris and throughout the country as France remains on a high terror alert. Following the January 2015 terrorist attack at the Paris office of satirical magazine Charlie Hebdo, the government launched Opération Sentinelle, a military operation that deployed groups of armed soldiers to guard "sensitive areas of the country," including popular tourist attractions, according to Politico. Hollande upped the country's military presence again following the terror attacks that occurred later that year at the Bataclan and the Stade de France in November 2015, with 3,500 troops stationed in Paris alone.

Following the incident in Paris, President Donald Trump sent out a tweet calling for the United States to "get smart" about the threat of terrorism. Although none of the officials involved in the investigation have yet made any statements about a possible connection between the suspect and Islam, Trump wrote that, "a new radical Islamic terrorist has just attacked in Louvre Museum in Paris," and said that France was on edge:

While some on social media have agreed with Trump, suggesting that the attack proves that the President's recent executive order banning anyone from a number of Muslim-majority countries from entering the United States was justified and necessary, many others have pointed out that Trump was quick to condemn the attempted attack in Paris while staying mum following the deadly mass shooting that occurred at a Quebec City mosque Sunday night.

A 27-year-old French-Canadian student has been charged with six counts of first-degree murder and five counts of attempted murder with a restricted weapon after he opened fire at Le Centre Culturel Islamique de Québec during evening prayers on the weekend, according to The Independent. Classmates of the shooter have described him as a xenophobe "enthralled by a borderline racist nationalist movement," according to The Globe and Mail, and his social media accounts show that he supported Trump, far-right French politician Marine Le Pen, and Quebec separatist party Parti Quebecois.

Despite the increased vigilance, the threat of terrorism continues to be a major concern in France. Following the shooting at the Louvre, Paris Mayor Anne Hidalgo told reporters that it was proof that the increased military security in the country was still needed, according to CNN, and said, "in this context of terrorist threat that concerns every big city in the world, we saw how efficient and relevant Paris security features were."