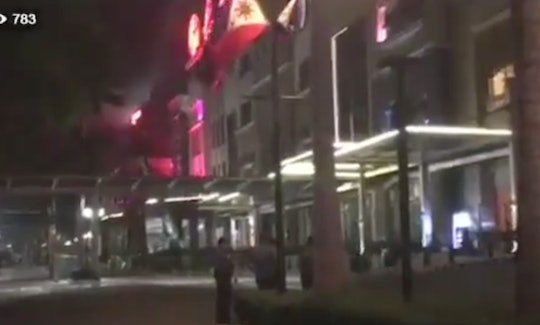 Was The Manila Attack Terrorism?

At around 1:30 a.m. local time, reports broke of an attack at Resorts World Manila in the Philippines. According to CNN, a lone gunman was reportedly spotted in the hotel shooting at guests while others ran for safety. As information is still coming in, many are unsurprisingly wondering: Was the Manila attack terrorism? It bears similar hallmarks to previous terror attacks all over the world, but there's been no official confirmation by authorities just yet.

UPDATE: According to the Associated Press, a Philippine police chief on Thursday told reporters in a statement that there was "no evidence that casino attack is terrorism and no confirmed reports of gunshot wounds."

EARLIER: As police continue to investigate the scene, there are still numerous unknown elements regarding the events of the attack. The number of fatalities, for example, has yet to be announced, as well as whether or not the suspect has been apprehended. According to CNN, "Heavily-armed SWAT officers wearing bullet proof vests and body armor," were on the scene of the resort, as well as first-responders who have been attending to the injured. According to The Manila Times reports, over 25 people have been injured as a result of the attack.

In addition to the gunman who opened fire, sounds of explosions were also heard from resort guests, multiple outlets have reported. As the Philippines have been battling ISIS forces in southern Mindanao, there is now much speculation as to whether this latest act of violence is indeed connected to a terrorist group.

According to Rita Katz, director of the SITE Intelligence Group that monitors terrorist activity, ISIS operatives are claiming that "lone wolf soldiers of Khilafah" are responsible for the attack. However, this has yet to be confirmed by any officials working on the scene.

While the world awaits more information from this latest act of violence, it's clear that the perpetrators were set on harming innocent people, and that's wrong no matter who does it.

As Time reports, "Philippine policemen have not given details about the incident but have begun cordoning off the area near the Ninoy Aquino International Airport," as the resort itself is located extremely close to the airport. And as Manila is the Filipino capital, this latest attacks hits especially close to home.

As to whether or not these attacks are indeed an act of terrorism, specifically committed by ISIS, it's important to remember that, unfortunately, confirming these violent attacks takes time. For now, the most important thing is that victims are getting the care and support they need. Hopefully, answers will begin to come in, but until then, keep in mind that the victims are still people, and for now, they need to get better.