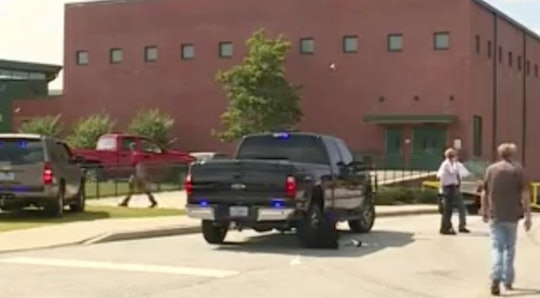 Was The Osborne Road Death Connected To The Townville Elementary Shooting?

Twin tragedies struck one South Carolina town Wednesday, as news of a shooting at an elementary school followed reports that a man had been found dead close by. Media outlets are reporting that at least two students and one teacher are receiving medical treatment in relation to the incident at the school, and a suspect described as a teenager has been taken into custody. Although details about the violence in Townville, South Carolina, are still scarce, officials told WYFF News that they believe that the Osborne Road death is connected to the Townville Elementary shooting, and it's putting the community — and the country — on high alert.

Update: In a press conference on Wednesday, authorities stated that the alleged Townville shooter had personal connections to the deceased individual found on Osborne Road. According to Capt. Garland Major of the Anderson County sheriff's office, the man, 47-year-old Jeffrey D. Osborne, was reportedly gunned down by his son, who then allegedly went on a rampage inside the elementary school approximately two miles away. No motive was given for the alleged incident.

Authorities in Anderson County were first alerted of the shooting happening inside the school shortly before 2 p.m., according to MS News Now. By 3 p.m., the as-yet unidentified shooter, who appears to have acted alone, had been arrested, students had been evacuated, and the school was deemed safe. Two students were airlifted to Greenville Memorial Hospital, and a teacher was rushed to another medical center by ambulance. The Los Angeles Times reported that the county coroner said the students' wounds do not appear to be life-threatening, there's no official word about the severity of the teacher's injuries. There's also very little information about the dead body that was discovered nearby.

WYFF reported that there is a "direction connection," between the two incidents, however, although the man's identity has not yet been publicly revealed. The adult male was found in his home, and The Washington Post reported that investigators have labeled the death a homicide. "Right now we’re not releasing any details other than it is a relative," Anderson County coroner Greg Shore told the Post. "We just wanna make sure the community knows that this situation is now under control."

The uncertainty of the situation is making the awful situation even worse for those involved. One student's mother told WYFF after picking up her child that she doesn't know who the victims are. "I just pray for those families," Jamie Meredith said, and reflected on what her daughter had told her about what went on inside the school:

I pray for those kids. I thank God it wasn't mine, but I feel so bad for them and I'm just going to pray that they're OK and I don’t know if they're my daughter's classmates or they're somebody I knew. I don't know. [I] just feel so bad.

She said they went in the bathroom. I don't know how they knew to go in the bathroom, but I know her teacher was shaken up. I know all the kids were scared. There was a bunch of kids crying. She didn't talk for about 5 minutes when I got her.

I'm just so scared. I don't even want her to go to school now.

The stories that are already beginning to emerge about the Townville Elementary shooting are heartbreaking, but also disturbingly reminiscent of the Sandy Hook massacre. In 2012, a gunman entered the Connecticut elementary school and murdered 26 people, 20 of them in just first grade. Right before that, he had shot and killed his mother in her bed. It was a disturbing portend to the violence that would unfold.

Of course, there is no confirmation that the person who shot the students and teacher in South Carolina Wednesday is in any way responsible for the Osborne Road death, even though we do know the two incidents are connected.