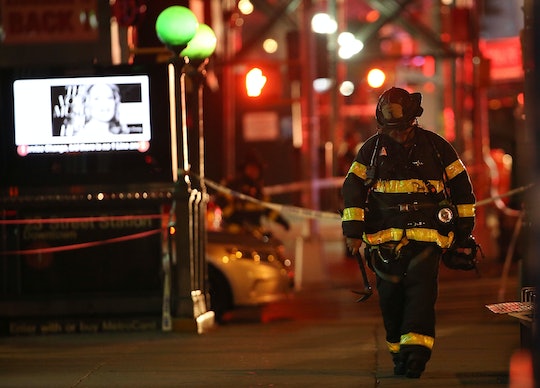 Was The Second Device Found In Manhattan A Bomb? A Pressure Cooker Was Found Nearby

What started out as a seemingly normal night in Manhattan for some turned into a terrifying, life threatening night for others, when an explosion occurred on 23rd Street and 6th Avenue in New York City Saturday night. Shortly after the first explosion, a second device was found just blocks away from the scene. As investigators worked throughout the night, details about the explosion continue to emerge but some want to know: Was the second device found in Manhattan a bomb — and if not, what was it?

Update: In a statement to the press on Sunday, New York Gov. Andrew Cuomo said:

There are still so many unanswered questions about last night's explosion. Was it an act of terror? Why did this happened? Who did it? These are all questions investigators, as well as the general public, are trying to make sense of and understand. New York City Mayor Bill de Blasio told reporters on Saturday night that the explosion was "an intentional attack" however, "there is no specific and credible threat against New York City at the time from a terror organization." But just blocks away from the first explosion, which injured 29 people, another "suspicious device" was found according to CNN. The device, according to CNN, was "a pressure cooker with dark colored wiring protruding, connected by silver duct tape to what appears to be a cell phone."

So was the pressure cooker device a bomb? It could have been — but investigators have been hesitant to use that word when talking about it. Pressure cookers have been used in the past to make bombs and injure many. In 2013, at the Boston Marathon finish line, two men placed two bombs in heavily populated areas that killed 3 people and injured 264 of them, according to CNN. According to New York Daily News, the bombs used in that attack were made out of pressure cookers and were "loaded with nails and ball bearings." While pressure cookers are typically used for cooking in kitchens, they can also be deadly in other situations.

If you seal a pressure cooker, steam builds in the vessel. It helps to raise the temperature and cook food, but sometimes when the cooker fails, you get a very energetic release.

It is this release that can project whatever is placed inside and cause injuries, he explained.

According to CNN, none of the officials at the scene of the explosion would say what was inside the pressure cooker they found. Police ended up safely securing and taking away the second device from the scene. But if the device had exploded, there is no telling what kind of injuries or destruction it might have caused.