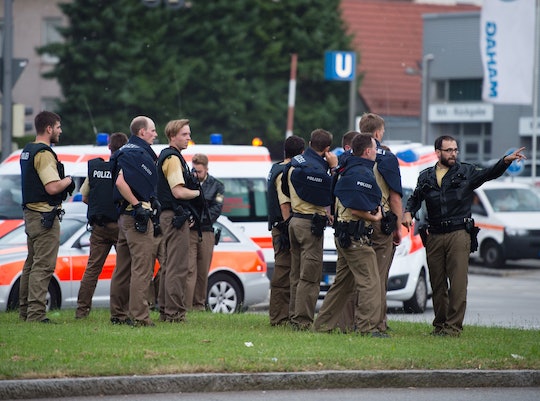 Was The Shooting In Munich Terrorism? A Shopping Mall Is Still Locked Down

A rampage in a German shopping mall on Friday led to multiple deaths and injuries, but was the shooting in Munich terrorism? Authorities still aren't sure of a motive in the attack, but according to BBC News, there may be three suspects still on the loose.

Media are reporting that Munich authorities have declared an emergency using the city’s smartphone warning system. Residents have been warned not to leave their homes: For your own safety, avoid squares and streets: perpetrators are on the run. Train and bus transport suspended. Turn radio and TV on. Munich’s mainline railway station is closed, and mass transit remains halted. U.S. citizens are advised not to come to the U.S. Consulate due to the uncertain security situation. Continue to shelter in place, contact your family members to let them know you are safe, and follow the instructions of police and emergency personnel. Continue to monitor local news stations for updates. Maintain a high level of vigilance and take appropriate steps to enhance your personal security.

UPDATE: A tweet published at 3:25 p.m. ET by Polizei München translated from German to English indicates that six people are confirmed dead in the attack in Munich. At 3:35 p.m. ET, they tweeted in English that there are six fatalities in Munich, but the number of people injured is currently "unknown."

The U.S. Department of State Bureau of Consular Affairs tweeted an emergency message for U.S. citizens at 3:12 p.m. ET:

Media is reporting shots fired at the Olympia shopping mall in Munich, Germany resulting in casualties. There are subsequent reports of shots fired in other locations in Munich. There is a major police operation underway. Mass transit around the city is also reported to be halted during the police operation. U.S. citizens are advised to shelter in place pending police announcements that the situation is under control. Review your personal security plans; remain aware of your surroundings, and monitor local news stations for updates. Maintain a high level of vigilance and take appropriate steps to enhance your personal security.

The Bureau of Consular Affairs also tweeted to ask U.S. citizens in Munich to pay attention to local news and encouraged them to check in with friends and family to let loved ones know if they are safe. The full emergency message from the U.S. Embassy & Consulates in Germany is available online; it includes information on how to get emergency updates from the State Department.

At 3:12 p.m. ET, Polizei München tweeted that there may be more gunfire in Munich outside of the mall: "Unconfirmed reports of more violence and possible #gunfire in the City Center. Situation is unclear. Please avoid public Areas. #munich#oez." Minutes before, the police tweeted that no suspects are in custody; they asked civilians to "avoid public places" and refrain from taking photos and videos that could inform the suspects of police movement in the city.

CNN reported during live television coverage that police announced there are three shooters involved in the Munich mall attack.

The incident started when shots were fired in a McDonald's at the Olympia-Einkaufszentrum mall, ABC News reported. Authorities began evacuating the Munich mall, but according to Reuters, there are still people inside. An unidentified employee told Reuters that many people chose to hide within stores:

All the people from outside came streaming into the store and I only saw one person on the ground who was so severely injured that he definitely didn't survive.

Police spokeswoman Claudia Kvenzel said that authorities believe the shooting at the mall has ended, according to CNN; the incident began around 6 p.m. in Munich. During a live broadcast, MSNBC reported that police are asking everyone in the city to stay inside as they hunt for the one or more gunmen who opened fire in the mall. All public transportation in Munich is shut down, according to BBC News. MSNBC shared an update tweeted by Polizei München:

Though it's unclear whether the mall incident is related to terrorism, ISIS "claimed responsibility" for a Monday attack near Wuerzburg, according to the Los Angeles Times. A 17-year-old attacked passengers on a train using an ax and a knife. None of the victims died, but police did kill the attacker.