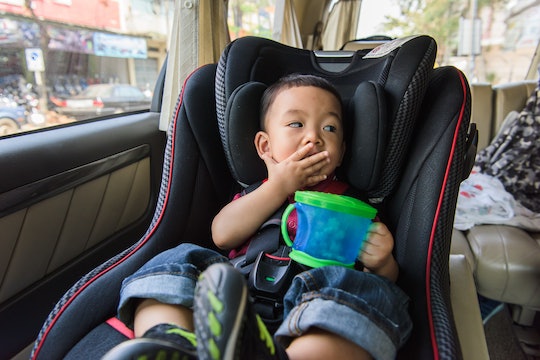 This New Law Could Have Kids In Car Seats Seats For Much, Much Longer

Transitioning the kids from booster seats to regular lap belts is a rite of passage for most parents. No more bulky equipment. No more wiggling. No more buckling tricky contraptions. Everyone is in and out of the car in a breeze. But what if booster seat laws suddenly changed? That's what might be happening in one state. Washington state's new booster seat law could affect parents of middle schoolers.

Washington's governor just signed a bill that updated booster seat laws, making it necessary for children to use them until they reach 4 feet 9 inches tall, according to ABC News Raleigh. The new law will go into affect in January 2020. Whoa.

Most children don't reach that height until middle school, or at least 11 or 12 years of age, according to Livestrong. Get ready to have some very upset pre-tweens on your hands.

And parents, you might not be so thrilled either.

Currently, in the state of Washington, all children under the age of two should be using a rear facing car seat, according to the Washington State Car Seat Coalition. Children ages 2 to 4 can sit forward facing using an age appropriate car seat up until 65 pounds.

Parents who do not follow the guidelines could get ticketed.

While current car seat laws vary from state to state, all have a height and/or weight requirement for being in or out of a booster seat. If you're wondering what your state's car seat laws looks like, Safe Ride 4 Kids has a great interactive map.

State car seat laws don't often reflect best practices recommended by safety officials. Instead they fall somewhere in between best practices and what's practical, enforceable and tolerable for the state's residents, according to Safe Ride 4 Kids.

Washington state is among the first to go above and beyond, siding with those in the safety industry and avoiding the middle ground, according to the University of Washington School of Medicine.

“These changes will help parents protect their children on the road,” Dr. Beth Ebel, a professor of pediatrics at the University of Washington School of Medicine and member of the Washington State American Academy of Pediatrics, said. “This change brings us in line with current best thinking about keeping kids safe.”

Many serious injuries can be avoided with the use of a booster seat, according to Ebel. Often times, poorly fitted seat belts can cause otherwise preventable injures to the spine, head, and neck, according to the National Institute of Health.

“When I talk to parents about child safety, they say, ‘Why isn’t this the law?’ Now that Washington law is updated, more families will follow these guidelines and more kids will come home safe. At the end of the day, that’s what’s important," she said.

Could car seat laws in other states change to mirror those of Washington? It's possible but only time will tell. Until then, buckling up is your safest bet when hitting the road.