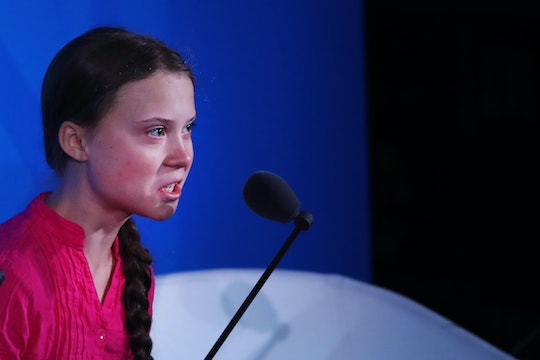 Greta Thunberg might only be 16, but she's taking the lead in opening people's eyes to the looming effects of climate change in a way that no adult has ever managed to before. The public witnessed this firsthand on Monday, when Thunberg took the stage at the United Nations Climate Action Summit in New York City. And in case you missed the moment, do yourself a favor and watch Greta Thunberg's speech from the UN Summit. Show it to your little ones as well because will be their fight, too.

Thunberg, a Swedish environmental activist who shot to international fame, delivered a passionate and devastatingly angry speech at the United Nations Climate Action Summit. The teenage activist — whose Global Climate Strike in March urged students the world over to skip school and appeal to lawmakers to take action on the climate crisis — delivered a stinging indictment of a global power structure that has put profit and a "business as usual" mindset ahead of taking decisive, united action on the issue, as she unflinchingly detailed. And everyone knows in their gut her words are absolutely true.

"This is all wrong. I shouldn't be here," the young activist declared, her eyes glinting, according to NBC News. "I should be back in school on the other side of the ocean."

She went on to point out how stakeholders have failed to act, noting, "Entire ecosystems are collapsing. We’re in the beginning of a mass destruction and all you can talk about is money and fairy tales of eternal economic growth. How dare you?"

Thunberg explained how such popular ideas as cutting global emissions by half in 10 years still only gives the world a 50 percent chance of avoiding irreversible damage, before issuing a stern warning to politicians everywhere. "The eyes of all future generations are upon you....The world is waking up, and change is coming whether you like it or not," she said.

There is no way you can hear this young woman's speech and not be moved. And although the trolling responses on Twitter were typical of those who refuse to accept empirical data, there was also heartening support.

Activist and actress Mia Farrow posted, "You have taken on this enormous task and with it, you have given everything and live with the pain of knowing, of trying ceaselessly, of caring with all your being in a world that prioritizes prosperity But you are moving people - thank you Greta. Thank you."

Meanwhile, Thunberg, who is open about her Asperger's diagnosis found her mission in life last year, when she sat outside Swedish parliament with a handmade protest sign after a crushingly hot summer in Northern Europe, according to The Guardian.

Thunberg's strike garnered international attention, and now she's giving stirring speeches all over the world. “In some cases where I am really passionate, I will not change my mind,” she explained to The Guardian about her personal convictions.

Following her UN speech, the teen game-changer revealed on Twitter her next step is to file a legal complaint against five countries, with other young activists. According to the UN Convention on the Rights of the Child, Thunberg noted, the nations in question have failed to act on environmental promises. Germany, and France are included the suit from the children, who hail from 12 countries total, CNN confirmed.

Unfortunately, the U.S. cannot be included in Thunberg's legal action because America has contributed more carbon dioxide in the atmosphere than any other nation but cannot be held accountable. This is due to the country not ratifying a portion of the treaty that lets minors seek accountability, according to CNN.

Clearly, Thunberg and her cohorts face obstacles trying to extract change. But her speech is such a bright spot in what can often look like a dark world. And I'm confident she'll guide her generation and others to a more sustainable future.