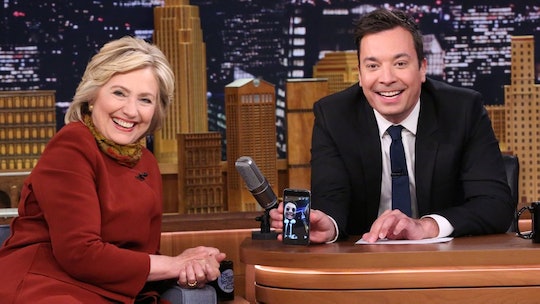 Democratic presidential candidate Hillary Clinton appeared on The Tonight Show With Jimmy Fallon on Friday, offering viewers her take on the value of presidential endorsements, her ability to Snapchat like the best of them, and her thoughts on GOP candidate, Donald Trump. Clinton even indulged host Fallon by participating in a mock job interview for the "job" of President of the United States. It was a delightfully light-hearted feature on the eve of the next Democratic debate scheduled for Jan. 17. Fallon wasn't shy about addressing fellow candidate Bernie Sanders' recent surge in advance of the Iowa caucus and primaries next month. Democratic candidates Sanders and Clinton are nearly tied in a recent Iowa poll. "Oh we're in a tight race," Clinton responded.

She then went on to try and minimize Sanders' recent surge, calling early polling "artificial" and that the race simply gets "really close" and "exciting" as they get closer to the primaries. Clinton continued: "I think it really depends upon who makes the best case that you can be the nominee to beat who ever the Republicans put up." Clinton then went on to talk about how the presidency is the "hardest job in the world," to which Fallon decided it was the perfect time to do a "job interview" for President of the United States: The results were witty and hilarious and Clinton was adorably on point.

Fallon started off his interview with a cordial welcome, then asked Clinton how she heard about the job. With only a slight hesitation, she wryly responded: "Fourth grade social studies."

Clinton talked about her experience and qualifications for the job of President, including her recent endorsements from Planned Parenthood and the Brady Campaign, although she conceded that rival Sanders' endorsement from ice-cream gurus Ben & Jerry's was a "delicious endorsement." As Clinton expanded on just exactly how she's qualified for the job, Fallon interrupted with, "Can you type?" After a chuckle, Clinton responded with a long-winded rant on the woes of autocorrect, to which Fallon then redirected her back to the "job interview" at hand.

Finally to wrap the interview, Fallon couldn't resist, asking Clinton is she had an email address she could be reached. Without missing a beat, Clinton laughed heartily and said only, "You can follow me on Snapchat."

Watch Clinton's cheeky mock interview on The Tonight Show below: