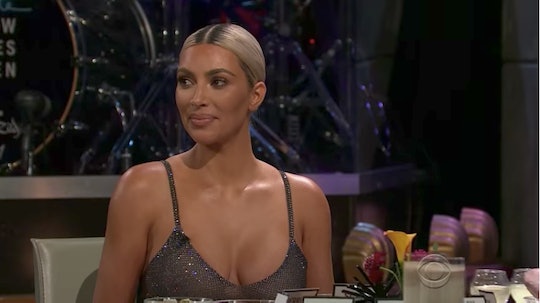 The internet has been begging for official KarJenner pregnancy confirmations for months now, but it looks like fans really won't be getting anything, anytime soon. Family members have skirted and dodged questions like the drama pros that they are. And most recently, Kim Kardashian proved that she will literally drink a sardine smoothie instead of talk about Khloé Kardashian and Kylie Jenner's pregnancy rumors. Talk about dedication.

While appearing on The Late Late Show with James Corden, Kardashian played the show's popular game "Spill Your Guts or Fill Your Guts." Reminiscent of Fear Factor food challenges, guests playing the game are required to answer difficult questions or consume something awful. Kardashian opted out of drinking bird saliva and eating a bull penis — which she described as "really small" — but did choose to fill her guts over answering one question.

Corden placed a sardine smoothie in front of Kardashian before popping the question: "There have been lots of rumors about your sisters Khloé and Kylie being pregnant. Are they true, yes or no?" Taking one for the team, Kardashian sampled the mixture, before spitting it into a trashcan. “F*ck, the aftertaste!” she said. “I need to go to dinner after this. So f*cking disgusting!”

If you're wondering about the questions that Kardashian did answer, they were a little less revealing than pregnancy confirmations, but still very fun. She ranked her mom and sisters in order of best to worst dressed: Kendall Jenner as the family member with the best style (not surprising, given her modeling career), then Kris Jenner, followed by Kylie, Kourtney Kardashian, and Khloé.

Kardashian's other big reveal was that husband Kanye West's worst habit is, and I quote, that he “falls asleep everywhere and it gets really embarrassing.” As nice as it would have been to find out for sure how many KarJenner babies could be coming in the new year, the image of a borderline narcoleptic Kanye West napping all over Cali may just be my favorite part of this entire segment.

Kardashian is having a good week when it comes to avoiding the persistent pries of talk show hosts. She appeared on The Ellen DeGeneres Show on Friday and managed to keep the rumors unconfirmed there as well. When DeGeneres peppered her with questions about the alleged pregnancies, Kardashian smiled and explained the family's protocol when it comes to rumors:

Alright, I'm going to break it down. This is how we work in the family. When there are lots of rumors, we have this family group chat and we threaten each other's lives if we speak for the other one.

DeGeneres responded with what would have been my first question as well, "How come I'm not in this family group chat? Why am I not a part of that? I'm Karla," referencing her own Halloween fictional Kardashian character. Kardashian laughed and promised her that she would "ask them," meaning the rest of the KarJenner gang, if Ellen could get in on the group chat. She also explained a but more about the reasoning behind not commenting on one another's rumors:

Considering Kardashian's recent reactions to being asked about the rumored pregnancies and her momager's similar avoidance of the question, fans will most likely have to wait for official comment from Kylie and Khloé to know if there is any truth to the rumors. Hopefully no one else has to drink pureed sardines to keep it all under wraps.