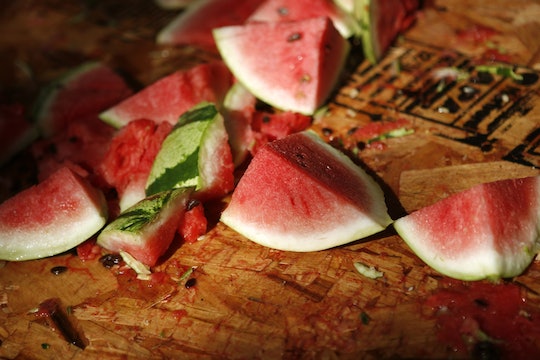 You Have To Watch This Woman Cut A Watermelon

My fiancé and I found out recently that our toddler son loves watermelon. He's actually really obsessed with the fruit. So now every time we go grocery shopping, we make sure to throw a melon in the cart. I am usually the one who has to cut up the summer fruit in chunks, which I thought I was pretty smooth at doing. That's until I watched a video of this amazing woman slice and dice a watermelon like it was nothing. Move over Salt Bae, Melon Mama is our new hero.

On Thursday, Twitter user allycxt tweeted a short clip of a woman cutting up a watermelon in chunks with such precision and skill, it defies all logic. She doesn't hesitate once as she separates the melon from the rind, then dices the fruit in mid-air. IN MID-AIR. It's beautiful work.

Allycxt's tweet received nearly 20,000 likes and more than 14,000 retweets as of Friday afternoon. But they weren't the first to post the clip. Twitter user rusticreign filmed and posted the video of his sister cutting the watermelon on Tuesday. While allycxt dubbed her #MelonMama, rusticreign originally called her #WatermelonBae. (Romper reached out to rusticreign and will update the post as soon when we hear back.)

Regardless of whether you're a fan of #MelonMama or #WatermelonBae, there's no denying that this woman has incredible skills. And people on social media are using both hashtags to give her much-deserved praise for her amazing work slicing and dicing that hunk of fruit. I would love to see more of what she can do, as well as know more about who she is.

There's also no doubt that Melon Mama (a.k.a Watermelon Bae) will make the internet forget all about Salt Bae. Remember him? Salt Bae, the nickname for Nusret Gökçe, came to fame earlier this year for the mouthwatering way he prepares meat. The flashy Turkish chief and restaurateur became a hashtag and meme after posting clips of him salting his food in the most gratuitous way.

You could say that watching Watermelon Bae and Salt Bae prepare food is an unforgettable experience. Both of them don't miss a beat, and possess such skill that we could only pray for. I know that, later on tonight, when I cut up that watermelon in my fridge, I am going to get chunks all over my counter. If I even attempted half of what Watermelon Bae does in that video, I'll end up in the emergency room.