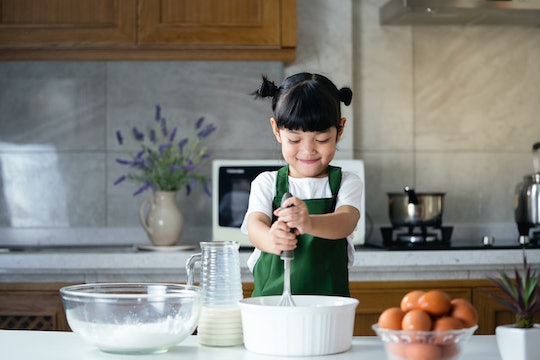 While getting a child to eat healthy can sometimes feel like an uphill battle, researchers have suggested that parents may have an unexpected secret weapon at their disposal: the television. A new study published in the Journal of Nutrition Education and Behavior has found that watching cooking shows could help kids eat healthier. Of course, not just any cooking show will do when it comes to encouraging kids to pick fruits and vegetables over sweets. According to researchers, you'll want to opt for one that highlights healthy foods.

As entertaining as episodes of The Great British Bake Off can be, the series' heavy promotion of rich cakes and sweet biscuits means it likely won't leave kids hungry for a crisp apple or carrot slices. But not all cooking shows are destined to leave children begging for sweets. According to researchers in the Netherlands, a study of 125 children ages 10 to 12 found that those who watched a kid-oriented cooking show focused on healthy foods and ingredients were 2.7 times more likely to opt for a healthy snack than children who watched a different episode of the same show that featured unhealthy foods.

"The findings from this study indicate cooking programs can be a promising tool for promoting positive changes in children's food-related preferences, attitudes, and behaviors," Frans Folkvord, the study's lead author and an assistant professor at Tilburg University in The Netherlands, said in a press release.

As part of their study, researchers had children at five schools watch just 10 minutes of a public television cooking show designed for children. While some episodes of the show featured healthy fruits and vegetables, other episodes focused on croissants, fries dipped in mayonnaise, and hamburgers. Afterwards, each child was offered the chance to choose one snack from four options — either an apple, cucumber slices, chips, or salted mini pretzels. Of the children who watched episodes featuring healthy foods, 41.3% chose to eat either the apple or cucumber slices, which researchers deemed the healthy snack options. In comparison, only 20% of the children who watched the unhealthy food episodes opted to eat one of the healthy snack options.

What's more, researchers found that children who watched the healthy cooking show episodes were also more likely to pick healthier snacks when compared to children in a control group tasked with watching a show unrelated to cooking. In that group, just 22.7% of kids chose a healthy snack after viewing. "The main finding was that cooking programs could positively affect healthy food consumption of children," the study said.

Researchers believe that children who watch cooking shows featuring health foods may develop a desire for such foods for two reasons. The first, is that seeing pictures of certain foods can often result in cravings for these foods. Researchers also credited Social Cognitive Theory, which argues that children learn by observing others (in this case, watching their peers enjoy health foods), as a potential factor.

Still, researchers have acknowledged that personality traits — such as an unwillingness to try new things — continue to maintain a strong influence on a child's desire to pick up healthy foods. However, they've argued that watching shows focused on healthy foods can still prove beneficial. "The likelihood of consuming fruits and vegetables among youth and adults is strongly related to knowing how to prepare most fruits and vegetables," Dr. Folkvord said in a press release. "Increased cooking skills among children can positively influence their consumption of fruit and vegetables in a manner that will persist into adulthood."

That means the right type of show — say, an episode of Chopped Junior that features a protein-packed fish, hearty salad, or fiber rich green vegetables — could leave kids reaching for healthier food options themselves both now and later in life.