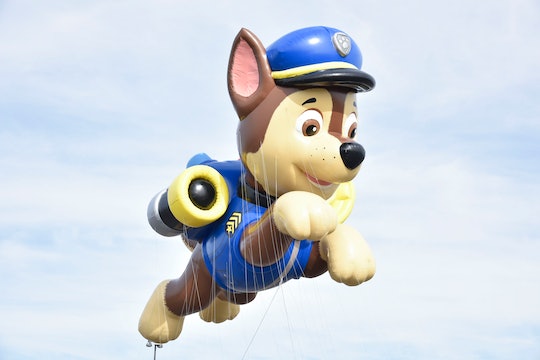 The One Big Benefit Of Watching 'Paw Patrol', According To An Expert

On any given day, usually after pre-school pickup and before dinner, you can find my son sitting in front of the television, watching Paw Patrol. "Chase is on the case!" he'll delightfully yell, while I barricade myself in the kitchen in a futile attempt to avoid the painfully predictable plot line that leaves me questioning my will to live. The show beloved by millions of children, my 4-year-old included, is also loathed by countless parents for valid reasons: if you're over single digits, it's predictable, the theme song is incredibly catchy, and the storyline is simple to mind-numbing degrees. But if you can stop hating on Rhyder long enough to look past the transparent characters and obvious story arches, and instead consider the benefits of watching Paw Patrol, it's clear that stomaching another Chase, Marshal, Rocky, Skye, Zuma, and Ruble rescue mission is worth it.

"There’s a little repetition, which is what drives parents crazy, but that’s also what's really beneficial for children," Maureen Healy, child development expert and author of The Emotionally Healthy Child: Helping Children Clam, Center, and Make Smarter Choices, tells Romper via phone. "In the plot there’s always a conflict, a problem, and then it’s solved, and that helps us feel better and certainly helps children feel better." According to Healy, it's the predictability of the show that actually makes young viewers feel safe in their ever-expanding, unpredictable worlds. Wide-eyed preschool-aged fans are being fed a continuous narrative that reassures them that when they're in trouble, there are people — in particular, community members to whom they're not related — who can and will help. And it is that reassurance, Healy explains, that can give children the confidence they need to reach out for assistance, instead of attempting to navigate that overwhelming and often confusing world alone.

The repetition of Paw Patrol, however, tells children that even when experiencing something new or meeting someone new for the first time, they'll be safe.

The Canadian show, currently on its sixth season, is geared towards preschoolers, an age when children are in the "thick of brain development," according to Healy. At this age, children are starting to become interested in new experiences, according to the Child Mind Institute, and that innate curiosity can also bring on intense feelings of fear and anxiety, often associated with these unknown experiences and the people who help facilitate them. The repetition of Paw Patrol, however, tells children that even when experiencing something new or meeting someone new for the first time, they'll be safe.

"If we want to build a muscle we go to the gym over and over again," Healy says. "It’s just what you do. And it’s the same thing if you want to build an inner emotional muscle or mental muscle: you have to repeat it over and over again. Especially in a young child who’s sort of new to this world and learning how the world works." When a child is wondering if they're safe, if they're supported, and just how the world works, a show like Paw Patrol can remind them that they're OK and not alone. "They’re trying to navigate this world in their own way, and Paw Patrol helps them recognize that there are people that help," Healy adds. "Although it’s annoying that it’s always the same story, it really helps them learn that they will be supported and safe."

Of course, social skills, empathy, a sense of community, and self-confidence can't all be gained by simply watching a television show, no matter how mesmerizing the dog-turned-police-officer character may be. Nor is a television show the only medium with which these lessons can be taught to children. Young children learn most by watching and mimicking their parents — a 2017 study from MIT revealed that children as young as 15 months can learn perseverance by watching a parent struggle and then succeed — and nothing can truly take the place of learned experiences. But American kids are watching an average of three hours of television a day, according to the University of Michigan, so if the television is on either as background noise or as a form of entertainment, parents can rely on repetitive shows like Paw Patrol to help their children learn positive, empowering lessons while they're being amused.

Once a child begins to understand that they're safe and that people in their lives — especially people outside of their parents — are there to help them, they gain the courage to try new things and expand their world, another important part of emotional and mental development, according to Healy. "When children feel secure and they feel supported, they can feel more confident that they can overcome their fears, they can overcome a challenge, and they’ll be supported and they know there’s someone to ask for help," she says. "When a child feels isolated or disconnected there’s a big problem. And I think part of the solution to that problem is help them feel connected and supported, which is what Paw Patrol does [because] there’s always someone there to help." And since, at age 4, children are more independent, having the tools to overcome a normal amount of fear and anxiety is essential to their continued development and as they start school, start making friends, and start spending more time with adults who aren't their parents (i.e. teachers, coaches, etc.).

It is important, however, that as children get older, parents teach them that their trust in others needs to be earned. "It’s always important to teach kids that you don’t just give your trust to people, they earn your trust," Healy says. "Obviously, when you’re in kindergarten and first grade you sort of have to rely on your teacher, but as you age and mature you need to have people earn your trust. There are people who are wonderful in the world and people who aren’t as great, so you want [kids] to become discerning as they age." But at the preschool level, according to Healy, it really is all about safety and security and learning that there are people besides mom and dad that can be trusted and whom your children can begin to trust.

Which is why Healy suggests that in spite of the repetition that is nothing if not annoying to adults, parents should sit down and watch Paw Patrol with their kids. "You can certainly say and point out during episodes, if you have the time to watch with your child, 'Wow, that person helped that person! That must have felt good! When we help other people, it feels good for us, too.' There are little nuggets of wisdom that you can share that we don’t even realize they’re getting… but they’re getting it," she says. In fact, a 2017 study out of Texas Tech University found an "increased physiological change in children when parents view programs with them as opposed to being in a separate room." And 2011 research at the University of Sussex found that repetition helps children learn more. While the study primarily focused on repetition in reading, the lead researcher, Psychologist Dr. Jessica Horst, did highlight the academic benefit of a child watching a television show repeatedly. "We know that children who watch the same TV programme[sic] over and over again do better in comprehension tests afterwards," she said, before going on to suggest that children don't need a large amount of books, but just need to read the same book over and over again.

Clearly, and perhaps unfortunately for parents around the world, the same could be said of a chid's favorite Paw Patrol episodes.

They’re trying to navigate this world in their own way, and Paw Patrol helps them recognize that there are people that help.

That's not to say you need to watch every painstaking episode with your child to the point of undeniable madness, Healy says. The quality of the time spent watching Paw Patrol, not the quantity, is what really matters. "Yes, it’s important to keep giving your kids positive messages, but if you’re going to be so annoying and frustrated with Paw Patrol, today is not the day to watch it with your kid."

"It doesn’t have to be all the time," Healy continues, "but when you do, not only just watch Paw Patrol but make it a valuable lesson and have that dialogue about whatever that episode was about."

So even if you're talking about that one episode when the pups save the Cuckoo clock or they rescue those annoying trick-or-treaters over, and over, and over again, you're child is hearing a completely different story; one that has less to do with a team of rescue pups and more to do with the assurance that as their world gets bigger, there are helpers ready and willing to guide them to and through the next exciting adventure.