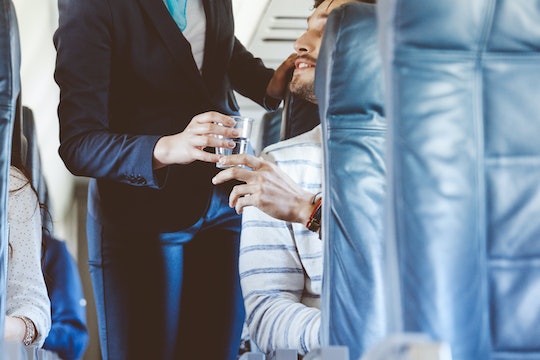 First, they take away your water bottle at security. Then you find airport vendors are charging $5 for one bottle. "That's OK," you think. "I'll just get a tea or coffee on the plane." But now, a recent study on airline water found the water on most U.S. airlines is actually unsafe for both drinking and hand washing. Perhaps you should have splurged on that bottled water after all?

A study on airline water released by DietDetective.com and the Hunter College NYC Food Policy Center has found that many major and regional airlines may have given passengers unhealthy water. What's more, in doing so, they may have violated the Aircraft Drinking Water Rule (ADWR), a federal policy implemented in 2011 that requires passengers and flight crews be provided with safe drinking water.

The study ranked the quality of water provided onboard 10 major airlines and 13 regional ones, giving each airline a "Water Health Score" from between 0, the lowest, and 5, the highest. To be clear, this was not a study of the bottle water most often served by flight crew when a passenger asks for a cup of water — that's thankfully likely always safe to drink. Rather, this study looked at the water used to make tea and coffee while in the air or provided for hand washing in the restroom.

Scores were based on 10 different criteria, including the airline's fleet size, ADWR violations, the presence of E. coli and coliform in water samples, and cooperation in answering water-quality questions. According to the Hunter College NYC Food Policy Center, scores of 3.0 or better were indicative that the airline provided relatively safe, clean water.

"An aircraft flies to numerous destinations and may pump drinking water into its tanks from various sources at domestic and international locations," the study noted. "The water quality onboard also depends on the safety of the equipment used to transfer the water, such as water cabinets, trucks, carts and hoses."

Airlines for America, a trade group that represents a number of airline carriers named in the study, told Romper in a statement that the water used onboard is drawn from municipal systems at whichever airport the aircraft is parked. Meaning, aircrafts are pulling water from a source that "is the same water source used throughout the airport, including for water fountains and restaurants, and delivered to homes, businesses and local communities each and every day," Airlines for America said.

But while the water source may be safe, the study noted that there are opportunities for the water to become contaminated if the safety and cleanliness of the equipment used to transfer, draw, or pump the water is found to be lacking.

Ultimately, DietDetective.com and the Hunter College NYC Food Policy Center issued their "Shame on You" award to both the Environmental Protection Agency (EPA) and nearly all of the major airlines tested for their failure to adequately answer detailed questions. "The EPA didn’t answer most penalty-related questions, and Spirit, Allegiant, and Frontier did not respond to any questions," the study noted. "Very weak responses — and responses that didn’t address questions — were provided by American, United, and JetBlue, which had a large number of violations during the past seven years."

Thankfully, there are some things passengers can do to avoid coming into contact with potentially contaminated or unsafe water on an airplane. First, DietDetective.com and the Hunter College NYC Food Policy Center recommend never drinking any water provided to you on board an airplane unless it comes from a sealed bottle. Consequently, this also means skipping any coffee or tea served in flight. Finally, researchers also recommend bringing your own hand-sanitizer on board to use in place of washing your hands with the water provided in the restroom.

Although I may not know how safe the water is onboard my next flight, at least I know what I'll be putting in my carry-on ASAP.