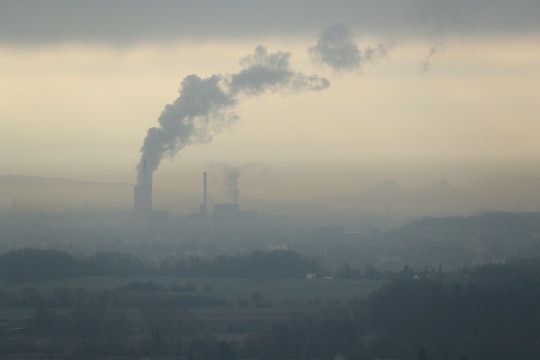 How Pollution Affects Your Kid's Health

Environmental pollution is a huge problem for people across the United States. The American Lung Association assessed in its annual "State of the Air" report that more than half of all Americans — 166 million people — live in parts of the country where they are exposed to "unhealthful levels" of pollutants. Environmental pollution isn't good for anybody, however, it's especially damaging for children. The American Lung Association did find that there was improvement in air quality between 2012-2014, with lower levels of year-round particle pollution in the ozone layer, but pollution is still a problem that needs to be addressed. If you're not sure how environmental pollution affects your kids health and how to prevent illness as a result of it, it's time to learn more about this serious problem.

High levels of particle pollution and ozone levels in the air are linked directly with premature death, asthma, difficulty breathing, and cardiovascular problems, according to the State of the Air report. While adults are affected by environmental pollution, children are a greater risk to suffer health problems as a result of it. They are at a greater risk for a number of reasons, including the fact that both their immune and respiratory systems are still developing.

Children also breathe in 50% more air per pound of body weight than adults, as well as consume more food and water per pound, which obviously causes them to inhale more polluted air into their bodies.

According to report in the BMJ Journals' "Environmental toxins; their impact on children’s health" study, children can be susceptible to the affects of environmental pollution while they're still in the womb. "Organ vulnerability may be greatest in the fetus," the report states, "and, for some compounds, toxic effects seen in childhood are the result of continuous exposure from conception." It's terrifying to think that your child could be suffering from the effects of pollution before they're even born. There are ways, though, that parents can protect their kids from the dangerous effects of environmental pollution.

The American Lung Association advocates for healthy air and believes that the best way to protect the future generations and is to decrease pollution levels. That will undoubtedly take a long time, unfortunately, so in the meantime they've put together a list of tips for parents that will help reduce kids' risk of being negatively affected by environmental pollution. They strongly recommend checking daily air pollution forecasts in your area. If pollution levels are high, they suggest that people avoid exercising in high traffic outdoors or near areas with high levels of traffic.

Another way you can help your children? By helping your environment. The American Lung Associations suggest families use less energy in their home, carpool or ride a bike to work, use hand-powered or electric lawn care equipment rather than gasoline-powered, and avoid burning wood or trash. It's unfortunate that there is no quick fix for this scary reality. If everybody does their part, though, we can invest in children's health and futures through helping the world around us.