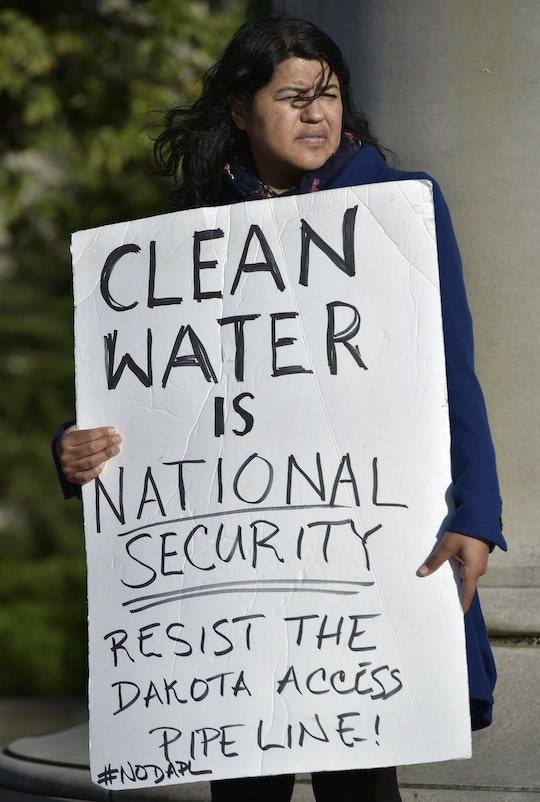 Thanksgiving is approaching, and as families across the United States prepare to eat Turkeys and all sorts of pies, it's a somber reminder that following the first Thanksgiving, Native Americans were victims to horrific genocide, and continue to be marginalized in their native land. The protests against the construction of the Dakota Access Pipeline at the Standing Rock Sioux Reservation in North Dakota is a sobering acknowledgement for how far the country still needs to go in rights and protections for Natives. The concerns of the protesters, who call themselves "water protectors" deserves the nation's attention everyday. But considering the sadly ironic holiday weekend approaching, here are ways to help Standing Rock protestors this Thanksgiving.

Natives of the Standing Rock Sioux Tribe and people standing in solidarity have been protesting the construction of the Dakota Access Pipeline — which would run near the tribe's reservation, possibly endangering their water supply and sacred sites — since July. The protests received widespread attention when Democracy Now!'s Amy Goodman covered the protests on the scene, releasing video footage showing the tensions between protesters and private security contractors. In one video, the contractors can visibly be seen responding to protesters with dogs and reportedly using pepper spray, according to the report.

And the clashes have worsened, with hundreds of protesters getting arrested since. There have been countless reports of police in riot gear, using pepper spray and sound cannons against protesters. And one 21-year-old protester was severely injured, with reports that her arm may need to be amputated, according to the Guardian. (The protester, Sophia Wilansky, alleges she was hit by a concussion grenade, but The Morton County Sheriff's Department claims officers did not use concussion grenades, though the department did not respond to Romper's additional request for comment.)

It's an upsetting situation, so here are a few ways you can help:

In partnership with the Standing Rock Sioux Tribe, the Mni Wiconi Health Clinic is a free clinic created by the Do No Harm Coalition from the University of California San Francisco that helps aid supporters who are "gathering to protect access to clean water and dignity of their ancestral lands."

Donate To The Sacred Stone Camp

The Sacred Stone Camp of the Standing Rock Sioux Tribe have set up a GoFundMe page for monetary donations.

Join A Campaign With The Sacred Stone Camp

The Sacred Stone Camp's website provides information and updates on its various campaigns and actions to bring awareness to the Dakota Access Pipeline protests.

As listed on its fundraising site, the Sacred Stone Camp has created a separate legal defense fund to help support protesters arrested while fighting the construction of the pipeline.

Talk To Your Family Members About Standing Rock On Thanksgiving

Thanksgiving is often a time to enjoy the company of your loved ones. But it's also a great opportunity to discuss the realities of how Native Americans are marginalized today. Standing Rock, specifically, is an ongoing struggle, and Thanksgiving dinner could be the chance to talk to family members who may not be informed on the conflict.