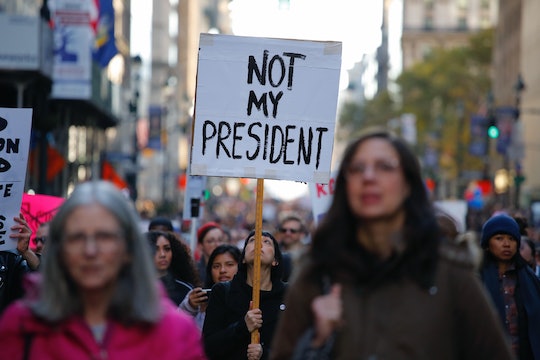 This past weekend, the media has made a *big thing* out of people (mostly whites) wearing safety pins. The pins symbolize that the wearer is an ally to women, the LGBT community, immigrants, and people of color who are afraid of what Donald Trump's presidency will mean for them. Immediately my friends took to Facebook to criticize the movement, saying that the pins are a sign of white privilege and don't actually help the communities they're supposed to be showing solidarity with. So if you are interested, here are some ways to support marginalized groups if you don’t have money to donate — ones that will be more helpful than wearing some damn pin.

Jezebel has compiled a long list of organizations you can donate to or volunteer for to protect people's rights. But I want to emphasize the work being done by the American Civil Liberties Union, or the ACLU for short. The day after his election, the ACLU's Executive Director wrote that they will take Trump to court if he establishes laws based off of some of his campaign promises, which were to deport illegal immigrants, prevent Muslims from immigrating to America, and punish women for having abortions. You can help the ACLU in it's fight to prevent these injustices by joining your local ACLU chapter. Membership to your state's ACLU affiliate will also include a membership to the national ACLU, and will cost a $25 donation. Once you are a member, you can sign up to be a volunteer. College students can also join their school's ACLU campus group, or start one if their school to doesn't have one yet. Aside from a membership to the ACLU, here are other ways to help:

Although Trump will be president, he doesn't have jurisdiction over many rights from whether gay marriage is legal to allowing undocumented students in public schools because these matters are determined by your state government. To urge elected officials to advocate for issues important to you and to marginalized groups, you can find your governor's contact information here, a map of state legislatures can be found here, and search through a listing of mayors all across the country here. And don't just write them — call them.

Join Anti-Trump Protests All Across The Country

Protests against racism, sexism, homophobia, and many of the other values activists feel Trump stands for are still going strong. In large cities such as New York, several more protests are underway. Complex recently listed planned anti-Trump protests across the country (though some have passed). And on Inauguration Day a protest will take place outside of the U.S. Capitol Building in D.C. for those taking a stand that Trump is #NotMyPresident. The Facebook event has already been shared more than 700,000 times, and 16,000 people have said that they will be attending. A Women's March on Washington is also being organized for Jan. 21 — the day after Trump's inauguration.

Know What To Do If You See Someone Being Harassed

And if you see a woman, person of color or LGBT person being harassed, know what steps to take to stop it. StopBullying and other organizations provide tips on how to prevent LGBT bullying in schools. And an illustrator named Maeril drew a comic this past summer showing how to stop Islamophobia that is extremely useful.

Getting involved and supporting marginalized groups doesn't have to cost you anything. Taking a stand to fight against the hateful feelings Trump's election has roused is what counts the most.