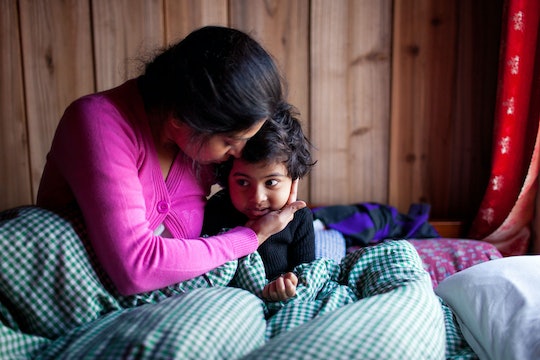 I Never Stopped Wanting To Adopt After My First Baby

I’ve always wanted to adopt. When I was younger, I visited an orphanage in Mumbai and felt an instant connection with the community there. I returned several years later to document them as a storyteller, and then returned again to follow a few girls on and off for several years for my first feature. To be clear, my desire to adopt is not altruistic. Quite the contrary, the children touched and moved me in indescribable ways — I just liked them so much! It brought me back to the many instances in my life where I felt such an unexpected closeness to new friends, a bond I did not feel with many of my own extended family.

I never stopped wanting to adopt. When I was 29, I tried to start the international adoption process from India, but at that time you had to be 30 to begin if you were single. By the time I was 30, I found myself in a relationship, and then another, and then eventually married to a man whom I loved. I told him within the first few weeks of dating that I was committed to adopting and he respected and agreed. After we were married we learned we had to be married for two years to start the process.

I’ve always desired my adopted child to have my same ethnic background, which is why I began the process and wait with India. It was partially a question of ease — I knew it would be easier to keep with my son’s culture being similar to mine, as I’d already been familiar with the region, history, and culture. I also felt the adopted child would fit easier within my family and “look” like my son’s sibling if they had the same heritage. But the international adoption game has changed significantly through my lifetime from a process where one waited months and could bring home a two month old to the world post-1993 Hague Convention on the Protection of Children where, because of safeties against sex trafficking and new legalities around cross-country adoption, the waiting list alone can be over two years. We were eager to start a family, so we tried to have one biologically and were lucky to conceive rather quickly. At exactly two years, we started the arduous adoption process.

I know that before Sai, I had never felt any qualms about adopting a child who would not be a newborn infant.

I found out that you now have to wait another 6-12 months after being matched with a child for the Indian courts to grant you guardianship, but I was not fazed. I figured I would get temporary guardianship and live in India with the adopted child and my son Sai* while waiting for the courts. It did not take long after Sai was born to realize there was no way my husband could be away from Sai for weeks, let alone months, and there was no way I could handle being with two children in a different country without my support networks and partner for an indefinite period.

It was then I saw that everything I had imagined about adopting in my dreamy bubble would have to be recalibrated. There were two sides to this coin.

The first was that I was now always thinking about what was best for Sai. I was a woman who once quit a job to move overseas on a few weeks notice, and years later, while dating my future shocked husband, I asked for a sabbatical from a cushy job at an ad agency to do a vineyard harvest (of course they said no, and once again I left a good job, this time to crush grapes).

Now, I was already busy months in advance trying to adjust floor plans to prioritize both a space for Sai and one where a new child would be welcomed. I went out of my way to denote special times with my son during his recent birthday, knowing it potentially could be his last as an only child. I made sure that we were clear in all our adoption paperwork about the importance of what we could and could not handle in a second child through the eyes of what Sai could and couldn’t handle as well.

The flip side is that I also want to make sure the new child will be treated equally. I want to take the exact same maternity leave, make sure I would have a baby shower for them too (my friend already volunteered to help), and save special hand-me-downs and books for them to enjoy.

But this is all the stuff that feels logical, the stuff that I can pretend I am in control of. The items on the list the planner in me can cross off.

Then there’s all the stuff I can’t.

For example, like most moms of a second child, I am constantly worried how Sai will get along with his sibling. This was quickly mitigated by friends’ stories of biological siblings they were never close with. But with the intention to adopt, I know I am also adding not only more uncertainty but more accountability to the picture. I’m a risk-taker and I Iove change, but will Sai? Would Sai be open to this if it was his decision? I know that every time Sai fights with his sibling I’ll have to step back and tell myself this could have happened even if they were biologically connected. I know every school decision, every trip decision, even every social outing decision will involve doing a quick balance in my head of whose preferences I weigh in, and how not to judge myself for the completely unpredictable chaos that will occur regardless.

The one thing that has not changed since having Sai is my love and connection to children who are not my own.

And again, thinking about our second child, I know that before Sai, I had never felt any qualms about adopting a child who would not be a newborn infant. I couldn’t have imagined then how close I would feel to my son while breastfeeding, and how long we would have that unique breastfeeding relationship. I have probably held onto my breastpump longer than anything else I own (I still haven’t been able to pass it on). It hurts to know I can’t have that with my second child. I won’t have the same photos of their first step or their first days in this world. But I’m committed to making (and documenting) memories that will make up for all of that.

The one thing that has not changed since having Sai is my love and connection to children who are not my own. I can see it with how I feel about Sai’s friends, and how I feel about the children I meet when I’m working. What’s even more beautiful is that I can see it in Sai too — how he’s able to welcome friends of his and mine into his life and feel fond of them. He remembers them and asks about them even if he met them during a trip and hasn’t seen them in a year. He’s already telling everyone “I’m 3, and when I’m 4 I’ll have a sister or brother.”

And ultimately that’s all that matters: hearing how excited my son is for his sibling reminds me he’s been in the dream all along.

*Not his actual name due to ongoing adoption proceedings.