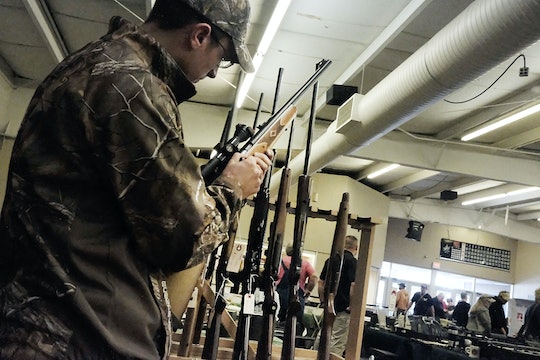 During the final presidential debate in October, a fiery discussion between Democratic nominee Hillary Clinton and Republican candidate Donald Trump broke out about late-term abortions in the United States, and that discussion has roared on between their supporters ever since the candidates left the debate stage. But is our current focus on late-term abortion misplaced? After all, in 2012, nearly 9,090 late-term abortions took place across the United States — but that same year, precisely 33,563 people were killed with guns. So why is there so much more research on abortion than on guns?

There's no official count of the number of studies on gun violence and abortions in the United States, of course. But there have been studies on why women have abortions, whether women regret having abortions, and how often coerced abortions occur. That intense focus from anti-abortion advocates on abortion research isn't necessarily a bad thing: the research actually helped pro-choice advocates secure reproductive rights for women across the country, and it's helped politicians and advocates uphold those rights today.

But if we have enough research to reliably detail the races, ages, income brackets, and religions of women who receive abortions, shouldn't we have even more information about gun violence and the people who purchase firearms? After all, guns kill more than three times as many sentient beings (people who are already born and who can feel pain) as abortions do.

The thing is, gun research is basically at a standstill in the United States. The Centers for Disease Control and Prevention studies plenty of public health issues (reproductive health and abortion included, along with car safety and many diseases), but it hasn't launched a study on how to reduce gun violence in more than 15 years, according to ABC News. The CDC collects information on firearm deaths and injuries and estimates that they're one of the top five causes of death for those under 65 in the United States, but the last study it funded to look into firearm harm reduction took place in 2001.

Why the research freeze-out? It comes down to an amendment passed in 1997 — the Dickey Amendment — which banned the CDC from conducting any research that would "advocate or promote gun control," according to CDC spokeswoman Courtney Lenard, who spoke to ABC News in June. "CDC’s Injury Center has very limited discretionary funding to dedicate to firearm violence research and prevention."

Soon after the amendment, Congress cut the CDC's funding by $2.6 million, the exact amount the department had spent on gun research the year before. (That money now goes to brain injury research.) And the lack of federal funding didn't only affect the CDC — Garen J. Wintemute, who runs UC Davis' Violence Prevention Research Program, told The Los Angeles Times that he lost about $1.5 million in federal funding once the Dickey Amendment passed.

In June, the American Medical Association said it would actively lobby Congress for more funds to study gun violence, calling the epidemic of gun violence in the United States a public health crisis. "Even as America faces a crisis unrivaled in any other developed country, the Congress prohibits the CDC from conducting the very research that would help us understand the problems associated with gun violence and determine how to reduce the high rate of firearm-related deaths and injuries," AMA President Steven J. Stack said in a press release, explaining:

An epidemiological analysis of gun violence is vital so physicians and other health providers, law enforcement, and society at large may be able to prevent injury, death and other harms to society resulting from firearms.

For those who have had heard enough intimate abortion details and want numbers to back up gun violence prevention legislation instead, the next step is to pressure their local Congressional representatives to provide federal funding for gun violence research. Because isn't it about time we know exactly why we're losing so many Americans each day to firearms? Yes, especially when a woman's uterus is more regulated than an assault rifle.