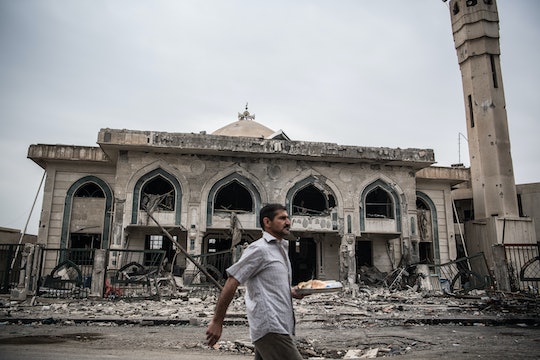 The Deaths Of 36 ISIS Members Isn't Cause For Celebration

As many as 36 suspected ISIS members were killed in Afghanistan Thursday after the United States military dropped what has now become its largest non-nuclear bomb ever used in combat, according to The Guardian. The Massive Ordnance Air Blast Bomb (MOAB) — nicknamed the "mother of all bombs"— was used in an attempt to target an ISIS cave and tunnel complex which the terrorist group had mined with explosives, and marked the first time the bomb had ever been used in combat since it was first tested in 2003. The mission has already been hailed by President Donald Trump as "very successful," but the deaths of the 36 ISIS members shouldn't be a celebration. That's because even though ISIS has committed unspeakable atrocities, there is still much that is unknown about the actual impact and value of the strike itself, and about what it means for the continued fight against terrorism. One thing that is does seem pretty clear though? The group's ongoing recruitment of vulnerable individuals — including women, children and refugees — means that winning the fight is about so much more than just dropping a giant bomb.

Speaking to reporters following the announcement, Trump remained vague about whether he had specifically authorized the bombing in Afghanistan. According to The Independent, he said that "everybody knows exactly what happened and what I do is I authorize my military," before adding that the United States "[has] the greatest military in the world," and that "they’ve been so successful lately" in carrying out their missions.

The MOAB strike certainly seems to be Trump's way of making good on his campaign promise to "bomb the sh*t out of ISIS," as President, but according to ABC News, Thursday's bombing didn't actually require presidential authorization, and instead was authorized by Gen. John Nicholson, the top U.S. commander in Afghanistan, as part of the military plan against ISIS he'd been leading since 2016. The MOAB bomb specifically had already been in Afghanistan "for months," in response to increase fighting between American and Afghan troops and the terrorist group, and, according to BBC News, was described by Nicholson in a statement Thursday as being "the right munition to reduce ... obstacles and maintain the momentum of our offensive."

Not everyone is convinced of that yet, however. According to The Guardian, a spokesperson from the Afghan defence ministry said that the blast did not result in any civilian casualties, and that only the ISIS base was destroyed. That's good news of course, but the sheer size of the bomb likely still caused great damage to surrounding areas, and unconfirmed reports from locals have suggested that "a teacher and his young son" may have been killed. Those in nearby areas have also reportedly claimed that the impact from the blast damaged their homes, according to The Guardian, and Naweed Shinwari, mayor of the district where the bomb was dropped, noted that it further "terrorized" the people who have long been victims of the war zone. He said, "My relatives thought the end of the world had come. Every day fighter jets, helicopters and drones are in the area.”

That alone, of course, doesn't mean that the military shouldn't have taken action, and it certainly doesn't mean that they should not be fighting ISIS in Afghanistan, but the impressive-sounding nature of the MOAB strike doesn't necessarily make it a big win against terrorism, either. For one, while ISIS is obviously a concern in Afghanistan, it's been estimated that the group's numbers are relatively low, especially compared to those of the Taliban. According to NBC News, officials have estimated there are between 700 and 1,500 ISIS members in the region, while the Taliban maintains a "25,000-strong force," that either controls or is fighting for about one-third of the country — including, according to CNN, a population of around 10 million people. By comparison, that's even more control than ISIS had even at the height of its power in Syria in Iraq in 2014.

It's also worth noting that this isn't the first time the United States military has dropped massive bombs on Afghanistan without much long-term success: according to The Guardian, Daisy Cutter bombs were meant to help wipe out al Qaeda and Osama bin Laden in the Tora Bora mountains in 2001, and were meant to be a sign of the United States' impressive military power. But the U.S. military effort in Afghanistan is still clearly ongoing and complex — and certainly unlikely to be significantly altered by the dropping of the MOAB. Furthermore, as CNN noted, the fact that bin Laden and other al Qaeda members were able to escape is a reminder that, while powerful airstrikes might sound like a big deal, "very few military campaigns are won from the air."

Then, unfortunately, there's the uneasy fact that even though it's easy to demonize ISIS members for the group's unspeakable acts, the process of radicalization means that it's not always a matter of good vs. evil. Terrorist groups like ISIS have long preyed on vulnerable people in their recruitment efforts, not to mention that they regularly capture people — particularly young women — and keep them as slaves. According to The Independent, militants routinely kidnap women and children, raping, beating, and otherwise terrorizing them, and offer them as "rewards" for loyal fighters.

But even those who aren't specifically captured aren't necessarily joining of their own free will: according to The Telegraph, ISIS militants have begun targeting migrants attempting to flee the Middle East and Africa for Europe by boat, offering money and protection to those who pledge allegiance to the group. They've also recruited young people in refugee camps in Turkey, Lebanon and Jordan — especially children, many of whom often end up traveling alone. When we celebrate the death ISIS members as a victory for "the good guys," we are forgetting that many of those who have ended up involved in the group were once victims, and that they didn't deserve getting caught in the middle. And the fact that the United States used a fancy bomb to kill them shouldn't affect that: as Vox's Zach Beauchamp aptly noted, despite the "breathless speculation and obsession over this bomb," the truth remains that "[it] isn’t a toy or some kind of geopolitical game — it’s a weapon that just killed actual humans."

Ultimately, as with all political headlines, the reality of the bombing in Afghanistan is likely far more nuanced and complex than it seems, especially when so much of the opinions we see have been boiled down to 140 characters or a series of trending hashtags. While a win against terrorism is something that is always going to be important for humanity, remembering that war isn't ever without consequences and victims is necessary.