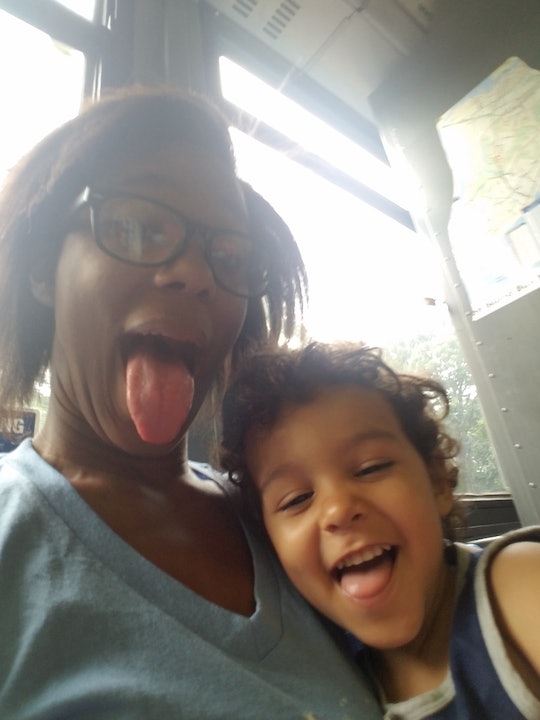 Why I Don't Use The Word "Crazy"

“Mommy, that’s crazy," my son told me recently. We were playing in his room, and I had moved one of his toys to a place where he didn't think it belonged.

My kid uses the word "crazy" quite a bit. I don’t know where he first heard it, but it literally could have been anywhere. I’ve seen several episodes of the TV show Bubble Guppies where the little goldfish say “That’s crazy!," so he might've heard it there first, but every time I hear him say it, it makes me uncomfortable. It’s hard to teach him that a word is wrong when the characters on one of his favorite shows uses it constantly.

Words are loaded with meaning, and “crazy” is no exception. Even if it's meant innocently, it's offensive because it stigmatizes the mentally ill. Same goes for words like "cuckoo" or "insane." Plus, it's just a lazy way to describe something that's unique or bizarre. I don’t consider my aversion to the term "PC." I just don't want to be a jerk to those who struggle with mental illness. I want to be aware of how my words affect people, and I want my child to be aware of this, too.

I learned the connotations of the word "crazy" a few years ago, after I used it in conversation and a friend pointed out to me how ableist it was. Since then, I've tried to be more conscious of how frequently I use it, and how the people around me use it. When I hear someone else describe something as "crazy," I have no problem gently reminding them that the word is offensive, and that applies doubly to my kid. When he uses the word "crazy," I tell him that we don’t use that word in our house. Instead, I encourage him to use words like “wacky,” “silly,” or “unbelievable."

When it comes to using offensive language, I have to lead by example.

Still, one of the biggest challenges in banishing the word "crazy" from our household has been eradicating it from my own vocabulary. It's easy for me to default to using “crazy,” and sometimes it slips out of my mouth before I even realize it. Until I made a decision not to use it, I didn't realize how deeply ingrained it was in my consciousness. But if I’m talking to my son, I will stop myself and say, “No, we don’t say that word.” It’s not easy, but I know that when it comes to using offensive language, I have to lead by example.

I know that trying to change my son’s vocabulary is going to be a marathon and not a sprint, and to be honest, I'm not sure if he even understands why I'm so opposed to the term. When I tell him that he shouldn't say “crazy” because it’s not a nice word to use, he cocks his head to the side and looks at me as if he’s trying to understand. In those moments, I remember that he’s just a toddler and is still trying to figure out the impact that words can have.

As a mother, it is my responsibility to make sure my son is not a jerk.

But that's why it’s so important to me that I eliminate the word "crazy" from his vocabulary now, while he’s still young and hasn't developed any bad habits yet. I'd feel terrible if he got to a point where he started using that word as a way to intentionally hurt someone's feelings. It is my responsibility as his mother to make sure he's not a jerk. And if I can change his behavior by teaching him something as simple as not using a single word, I feel like that’s the least I can do.