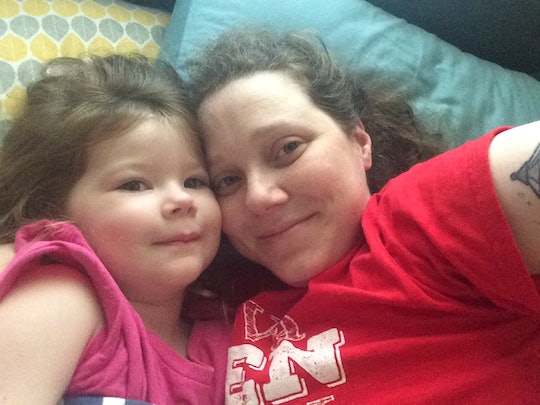 It only took about six weeks after the birth of my first child for me to be totally convinced that bed sharing would be the way to go for us. It was the only way I got any sleep, and my son just seemed so much happier. In those first early weeks of being a first-time mom, I wasn't thinking very far into the future. I never would have guessed that I'd still be OK with my son being in bed with me six years later, but there are still nights when he wants the extra snuggles, and I'm more than happy to oblige. Honestly, I wouldn't change anything. My partner and I are fine with a bit of musical beds, and we'd never tell a kid, sternly, to go back into their room and let us sleep. Essentially, we have an open-bed policy, and it works great for us.

Our 6 year old very rarely wakes or needs us in the middle of the night. In fact, I can't remember the last time I've heard his clomping feet coming down the hall when it was still dark outside. More likely, he wakes up early on a weekend, sees that he's alone in his large bed, and decides it'd be cozier with my partner and me and his little sister. But if he ever did come in during the wee hours and tell me he was scared or lonely, we'd rearrange things so he'd have someone to sleep with. Likely my partner or I would go with him into his room, where he and his sister share a queen-sized bed. But the main point is: none of my kids has to be alone at night if they don't want to. Ever. And a lot of that policy has to do with how frightened and alone I remember feeling as a kid. I just don't want my kids to feel stressed about that. Not when we can all sleep well together.

I don't think they were wrong to want the time alone together, but I'm not comfortable enforcing this with my own kids, because I remember how lonely I felt.

My daughter is newly 3. She makes the short trek down the hall from her bed to ours almost every night. It hardly even wakes me up. At some point, I just realize it's her little arm around me and not my partner's. She doesn't verbalize why she wants to sleep with us, but her reasons don't matter; it's what she wants to do and I don't feel like I'm off-duty as her mom just because it's dark outside. If she needs nurturing and snuggles and I can provide it, then why not? Especially since I've been sleeping soundly with my kids since they were born.

I have a lot of memories of being a kid and knowing I shouldn't go wake up my parents or interrupt their TV time if I couldn't sleep. I don't think they were wrong to want the time alone together, but I'm not comfortable enforcing this with my own kids, because I remember how lonely I felt. How unfair it seemed that just because it was after "bedtime" I wasn't allowed to have access to them. How acutely unjust it felt that they got to have camaraderie with each other, when I was expected to be alone, even if I wasn't asleep yet, even if I was afraid or worried.

I'm way too lazy to get out of bed and walk my child back into her own room just because I feel like I should be following some arbitrary rule. I like sleeping. I like staying in bed. And I don't see that I'm doing anything detrimental to my children by being so lax.

For my own children, I want to drive home the idea that I'll be there for them no matter what, even if I'm tired and cranky and it's the middle of the night. This is true when they are little, but it'll be true when they're older too. When they can't sleep because something is bothering them, or if they ever get into trouble in the middle of the night in their teenage years. Because I've been open and consistent with this philosophy, I don't feel like my kids are ever really testing it or manipulating me. If they are comfortable on their own, in their bed, they stay there. They don't have a lot of nighttime anxiety, not like I remember having as a kid.

And with any parenting decision I seem to make, convenience is a huge factor. I've never sleep-trained them in any way. Other than night-weaning during pregnancy, I can't think of a single transition that resulted in tears and frustration. (And even that was short-lived because although breastfeeding wasn't offered, snuggles and bed-sharing were.) I'll admit it, I'm way too lazy to get out of bed and walk my child back into her own room just because I feel like I should be following some arbitrary rule. I like sleeping. I like staying in bed. And I don't see that I'm doing anything detrimental to my children by being so lax. Having a 6 year old who's now so independent is a really encouraging sign for me.

Before I had children, I used to love watching Supernanny. I'd watch in horror at how being a lax parent seemed to be a recipe for disaster. The kids on that show were willful and difficult and manipulative and their parents were at their wit's end. So I was somewhat surprised, when in my own parenting, I disregarded the general wisdom that the supernanny, Jo, often laid out. Especially in regards to sleeping arrangements. I'm far from the first mom to have felt like I had things figured out before I had kids. But I'm also really glad I didn't stress over abandoning my old thoughts. My kids wanted to be close to me. I wanted to be close to them. It wasn't causing behavior problems. In fact, I think it strengthened our bond and ultimately led to their independence.

Especially when my kids are feeling vulnerable, when they're sick, or fearful, or anxious, I want to be there for them. It would cause me stress to try and ignore their needs. I've been pretty consistent in my attachment parenting. Not because I was determined from the get-go to parent that way, but because it was always what felt right for me and my children. Night-time parenting is no different. There is no cut-off time when I stop being the mom they know and love. And, besides, I like the snuggles as much as they do.