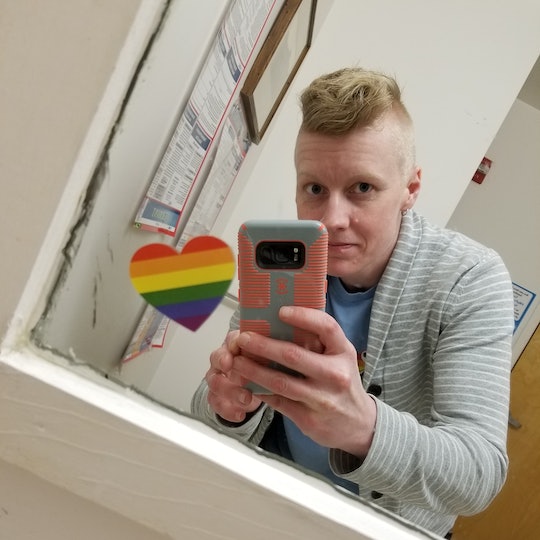 June Shouldn't Be The Only Month We Feel Safe

I was young, but I knew I loved differently, and I knew that pink triangle meant my teacher did, too. I also knew I would be punished for being gay, so I was very careful about avoiding the subject entirely. I already felt like people could see my secret because it pushed against my insides so hard sometimes that I was sure the truth of who I was must have been written all over my skin. Queer. Faggot. Fruit. Dyke. Homo. My secret wasn’t safe with anyone, except maybe the teacher who had the courage to put a symbol of LGBTQ pride — or perhaps defiance — on the window of her classroom during the late '80s.

And now it’s June, and I can’t NOT see a rainbow flag pop up in all of my social media feeds. June is Pride Month, and this year in particular is the 50th anniversary of the Stonewall Riots. The violence against marginalized queer people on that early morning of June 28, 1969, was met with resistance, and when police lost control of the situation, a spark was lit in the community. That resistance was the catalyst for the LGBTQ equal rights movement. With 50 years between Stonewall and today, and with the number of companies using Pride Month to capitalize on LGBTQ folks’ willingness to give money to places that support and represent us, you would think that a lot has changed since I have been in school.

According to the Human Rights Campaign's "2018 LGBTQ Youth Report," only 13 percent of youth report hearing positive messages about being LGBTQ in school. And only 26 percent of LGBTQ youth report that they always feel safe in the classroom. To do the math, this means 87 percent of youth hear either nothing or negative messages about being LGBTQ and 74 percent of LGBTQ youth don’t feel safe at school. There is a very clear connection here between those two observations. Because when LGBTQ topics are not talked about, they are perceived as taboo, something to be ashamed of, and inappropriate. And if a child, student, or adult identifies as LGBTQ, they feel the shame of not being “normal.”

Right now heteronormative thinking and biases are killing us.

The more things change, the more they stay the same.

Society gives the LGBTQ community the message that we should be quiet; we should try to fit in; we really need to stop making others uncomfortable.

Well, I have been uncomfortable for a very long time.

I was assigned female at birth and lived as a female for almost 40 years. Living in a small, conservative town in a religious and bigoted family as a girl who liked other girls did not bring about rainbow cakes and a coming out party. I was very aware of my “different” sexuality from an early age, and I knew I felt like more than just a girl, too. I happily owned the "tomboy" label because that allowed me to behave in masculine ways. It allowed me to own the boy part of myself. But that piece of me wasn’t identified until much later, when I finally had the language to know I am nonbinary. At the time, all I knew was that I was different — I didn’t see myself in any of my books, cartoons, movies, friends, or family members. When the only sign of representation you have is your own reflection, you try to find reasons not to hate yourself for not being like everyone else.

You try to find signs that tell you you’re not alone.

I guess I get to feel more comfortable during June; this one month a year when I am told there should be Straight Pride or when passive allies and businesses think it’s trendy or cute to change the border on their profile picture or adjust promo codes. But where is this support the rest of the year?

I need to see more companies, allies, and media outlets make an effort to share our stories, show our families and relationships, and celebrate the many ways we express ourselves all year long. Right now heteronormative thinking and biases are killing us. LGB youth are almost five times as likely to have attempted suicide compared to heterosexual youth, according to the Centers for Disease Control and Prevention report. The same report found that nearly one-third of LGB youth will attempt suicide at least once. LGBTQ adults attempt suicide at two times the rate of other adults, according to the National LGBT Health Center. Among transgender adults, the lifetime prevalence of suicide attempts is 40 percent. In 2019, eight transgender people have been violently murdered, according to the Human Rights Campaign. All the victims were Black trans women.

We have 11 more months out of the year to cash in on the beauty of humanity.

Society believes that cisgender, heterosexual, gender role-following and gender-conforming people are the normal ones. It’s not uncommon for someone who has never seen a transgender person or someone like me (who identifies as nonbinary) to believe that I am abnormal or that I don’t exist. I am disrespected, feared, and hated. Normalizing us by providing representation and visual support will dispel the myths that I am a pedophile who deserves conversion therapy at best or death at worst.

A lack of allyship and representation leads to bullying, discrimination, and abuse. It also leads to depression, anxiety, and self-harm. We are the ones constantly feeling unsafe, yet someone else’ comfort is often considered over ours. The 2017 Youth Risk Behavior Survey found a significantly higher portion of U.S. high school students who self-identify as lesbian, gay, or bisexual (LGB) reporting that they have been bullied on school property (33 percent) and cyberbullied (27.1 percent) in the past year, against 17.1 percent and 13.3 percent among their heterosexual peers, respectively. Meanwhile, a study from University College London revealed what many of us in the queer community already know: LGBTQ youth and teens are more depressed than their heterosexual peers.

We can do so much better than this. We have 11 more months out of the year to cash in on the beauty of humanity.

These actions take a load of emotional labor off my very tired shoulders.

If you truly are an ally, throw a rainbow or transgender pride flag, pin, or stick on your office door, your backpack, or front door. Wear some pride gear or shirts that promote LGBTQ acceptance. Love is love. Gender is fluid. Straight but not narrow. Argue with those bigoted relatives and friends who take up space on your feeds. Show me you will not let ignorance pass. Or block them. Bye Felicia! Introduce yourself and include your pronouns. Hi, my name is Amber. I use they/them pronouns. Or wear name tags or buttons with your pronouns. He/him. She/her. They/Them. And correct others when they make mistakes. Amber uses they/them pronouns, not she/her.

These actions take a load of emotional labor off my very tired shoulders. They also create safe and comfortable spaces for me and other members of the LGBTQ community. Choose my comfort or that of your coworker, student, or child over your own. And you don’t have to know if there is a queer person in the room. Extend a sign of allyship so that we know we can be who we are without having to defend, explain, or, worse, hide ourselves.

Pride should not be capitalized on just for the sake of a bottom line; the bottom line is that I deserve to feel safe, seen, and represented every day. Fly the flags, announce your pronouns, and market to the LGBTQ community year round — not just in June.

There is likely an elementary school kid looking for someone to trust with their secret. Are you ready to be the ally they need?